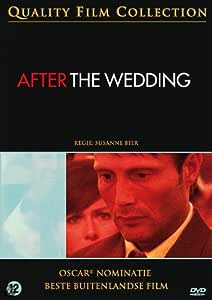 A. D. Gherson
5,0 sur 5 étoiles A rollercoaster of emotions.
Commenté au Royaume-Uni le 15 septembre 2019
Achat vérifié
I have never seen a Danish Film before and this was what I will quite simply say covers everything-happiness, sadness, discovery, renewal of old feelings, loyalty and much much more. The writing is so very good, the idea just so right I cannot honestly do it justice. But, what I can do is- get it and watch it and then see it again as there is so much to take in one viewing is only to get part of the story
I now look forward to see the American take which I hope will be just as good.
En lire plus
2 personnes ont trouvé cela utile
Utile
Envoi de commentaires en cours...
Merci de votre commentaire.
Malheureusement, nous n'avons pas réussi à enregistrer votre vote. Veuillez réessayer
Signaler un abus
Traduire les commentaires en Français

F. L. P. Souza
5,0 sur 5 étoiles Realistic drama at its best
Commenté au Royaume-Uni le 18 mai 2015
Achat vérifié
This film just might be the best picture with Mads Mikkelsen, and he has done many very good films. The thing is, when he made this one, with an excellent cast brilliantly directed by Susanne Bier, none of these people were internationally famous; fame came later, with the popularity of "The Girl With a Dragon Tatoo" and series like "The Killing" and "The Bridge". And because of that fame, we now get treated to the international distribution of this great film.

This is not a crime thriller, mind you. This is drama at its best: a great cast directed by someone who can get the best out of every actor. They seem so natural, you may forget you are watching a movie. The characters are developed very well throughout the story, each with their positive and negative traits, nothing is pure "black or white"; it makes you identify with their dilemmas and how everyone is trying to do the right thing, but that generates multiple conflicts. There is no "good guys versus bad guys" here; just human interaction, beautifully displayed. For genuine drama lovers, this is highly recommended.
En lire plus
3 personnes ont trouvé cela utile
Utile
Envoi de commentaires en cours...
Merci de votre commentaire.
Malheureusement, nous n'avons pas réussi à enregistrer votre vote. Veuillez réessayer
Signaler un abus
Traduire les commentaires en Français

I would give After The Wedding five stars for a few scenes of great emotional power, particularly those between the daughter and her father, and her step-father. They get something that is quite rare in cinema, and while melodramatic, it does access certain truths with a sense of shock to the viewer, it is so immediate. The challenge in making it was probably how to make it hang together, which it just about does, and also how to modulate the tone, which does stay at a fairly hysterical pitch for quite a lot of the time. There is a risk of it being too much like a soap opera, which may explain the very agile camera. I didn't always like this but it was more effective than in The Tree of Life. The acting is very good indeed, and Mads Mikkelsen helps to ground the film with his understated performance - he always feels as if he has something more in reserve, and his face holds the interest - and the emotion of the moment. His first meeting alone with his daughter is particularly moving in a quiet way, both actors inhabiting the emotions of their characters in a way that comes across with great subtlety. The director Susanne Bier uses a lot of close-ups in these scenes, particularly of people's eyes - it's as it she is trying to pinpoint the surface of maximum revelation of the inner being. The film is not without its moral ambiguity, specifically asking questions about how right it can be to withhold information, and to play at being God. The patriarch businessman is a rambling, powerful figure who shows bravery but also is less than perfect, perhaps, in contacting Jacob when he does. Presumably he could have made more of an effort before, but chose not to ... There is something egotistical about this, but it also makes his altruism moving in the present, if a bit double-edged, because he is exercising the control he always has. It is a kind of psychological wrestling with Jacob, although he is a somewhat tarnished angel. This aspect of the film could have done with sharper focus, where instead there is a welter of emotion.
En lire plus
3 personnes ont trouvé cela utile
Utile
Envoi de commentaires en cours...
Merci de votre commentaire.
Malheureusement, nous n'avons pas réussi à enregistrer votre vote. Veuillez réessayer
Signaler un abus
Traduire les commentaires en Français

Pansypotter
5,0 sur 5 étoiles Those Great Danes!!!!
Commenté au Royaume-Uni le 27 avril 2017
Achat vérifié
Wondrous!! Totally involving, & yet incredibly stylish, from the superb acting (quite unbelievably intimate at times) to the beautiful settings, to the brilliant camerawork: I also loved the soundtrack -- unobtrusive at times, full on at others.
I'm so glad I came across this movie, after watching 'A Royal Affair' -- I wanted to see more of Danish Cinema, there is something about Scandinavian light, it has such softness & clarity:
I really enjoyed this movie, & I'd recommend it to anyone
En lire plus
Une personne a trouvé cela utile
Utile
Envoi de commentaires en cours...
Merci de votre commentaire.
Malheureusement, nous n'avons pas réussi à enregistrer votre vote. Veuillez réessayer
Signaler un abus
Traduire les commentaires en Français