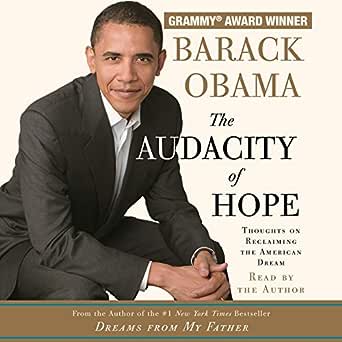 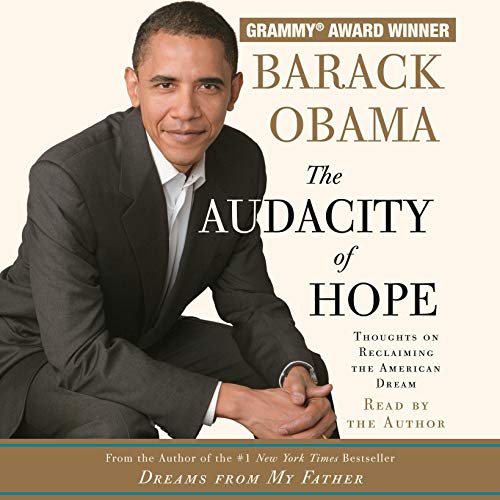 The Audacity of Hope: Thoughts on Reclaiming the American Dream

Mme Linda Watten
5,0 sur 5 étoiles Splendid blueprint for the 21st century
Commenté en France le 1 mars 2009
Achat vérifié
Well written and concise, The Audacity of Hope formulates a working blueprint for the United States' way forward into the new century. It is smart, political, and gives a good idea of who Obama is, why he believes what he believes, and what we can expect. Worth reading.
En lire plus
Utile
Commentaire Signaler un abus
Traduire les commentaires en Français

Peter Denimal
4,0 sur 5 étoiles Barack Obama before the president
Commenté en France le 17 avril 2009
This is a good book to understand Barack Obama as a person and his origins well before he won the presidential election, with an eye on all aspects of human activities from family to professional connections via political involvement, and which centres on achievements and vision rather than electoral ambitions. It is impossible to write a book like this once such ambitions have been fulfilled, because new books will naturally come with the inescapable assessment of the presidency.

L.W
4,0 sur 5 étoiles Thoughtful, measured and intelligent.
Commenté au Royaume-Uni le 13 juillet 2016
Achat vérifié
An intelligent, thoughtful, measured book setting out Obamas political take in his country as well as some personal background. My impression was that he comes across as genuine and sincere despite knowing that this book was written in mind of winning over voters. At times Obama displays a cautious pragmatic side to himself, I felt this came more dominant later on in his presidency. The book is nicely set out but also has a lucid style so many themes flow together. He offers a critique of the current (as of 2008) political situation in the US and criticizes both the Right and sometimes the Left for the faults he thinks they have. Obama explains quite well the federal nature of the US government and how the senate and the high courts can block measures that the president wishes to put through. On the foundation of the US he doesn't really have an answer as to how such a fine declaration of liberty and human rights co-existed with slavery, I felt he sounded rather weak and unconvincing in this part.

There's an interesting chapter on Politics, Obama writes about the town hall meetings he attends and the ordinary concerns that people often raise. He addresses the challenges that the media present and how important name recognition becomes when running for office. Funding is a well known problem in US politics, Obama sees nothing wrong with accepting donations from interest groups but not wealthy hedge fund mangers. He also talks about the cliff, the gulf that a Politian has to fall when they fail, most of us can hide our misfortunes but politians have to live it all out in the open, no wonder they become cautious and hesitant Obama thinks.

The next part of the book is about Opportunity, Obama visits Google and is surprised to find nearly all it's interims are Asian or Jewish, where are the blacks and Latinos Americans Obama wonders, the rep from Google says that in order to stay competitive they can only take the very best graduates. The book suggests improvements to policy to help narrow inequality, better schools, more investment in science, research and development. Obama decries the tax breaks given to the rich under Bush and sets out a vision for a more equal society.

Faith is the next topic in the discussion, Obama believes in pluralism and the separation of Church and State. He also believes that abortion should be legal under any circumstance and he is weary of Christian fundamentalism and Intelligent Design. Despite this Obama does say he believes in God, but that the Bible is not a blueprint for State politics. He notes that democrats in the past have been to cautious about embracing religious movements though and feels that the black church has served as an instrument for social justice over the years. He also appeals for calm and respect to be shown on both sides on the debate and that each side recognise the others are not as bigoted as they often suppose.

Race is next covered. Obama vows to finish the work of the civil rights movement and end discrimation. He believes sincerely though that the country is not as divided as many suppose and that there is much good will among people. Obama warns against a rising tide of xenophobia directed towards immigrants in the US and calls for fairer pay to make sure US workers are not being undercut. Many pages are spent addressing parts of Chicago which have been effectively 'lost.' The area has a high % of African Americas, the drop out rate from school is worryingly high, as is the crime rate, drug use and teenage pregnancy, joblessness is a major concern. Obama tells us that he is cautious about simply throwing money at the problem, he tells us that the majority of honest hardworking black families are just as fed up with the situation as the rest of the US, more so in fact, because they often have to live in these crime ridden communities. Still Obama thinks there are a few steps which ought to be taken by the government, such as ensuring that teenagers finish high school and also expanding programmes which have a proven record of reducing teen pregnancies.

The part on world affairs is a little rambling, I didn't think Obama was at his best here. It was more a description of what has happened rather than what he will do.

Mrs K.
5,0 sur 5 étoiles An inspiration
Commenté au Royaume-Uni le 11 septembre 2019
Achat vérifié
Naturally he is writing about the American political scene, but his sage and insightful prose applies universally. It has been poignant reading so many years after it was first written, for he could not have known at the time that he would become President. .. maybe the last President who tried hard to be honest. Donald Trump's gargantuan effort to wipe out Obama's legacy just makes me so sad for America.... and I am not left wing. It is beautifully written and I am about to read it a second time in order to linger on his wisdom. Incidentally I was led to his two books after reading his wife's excellent autobiography.
En lire plus
2 personnes ont trouvé cela utile
Signaler un abus
Traduire les commentaires en Français

Nefru Re
5,0 sur 5 étoiles Obama's vision for a united America
Commenté au Royaume-Uni le 25 janvier 2019
Achat vérifié
The book, written when Obama was a US Senator, is an early draft of the political views that later came to shape his presidency. A constitutional lawyer and politician, the author vividly and with his characteristic, often self-deprecating, humour, describes the inner workings of US law and politics. His main message is that Americans are not as divided as headlines would suggest, and that the nation can rally around a centrist approach to government and legislation. At the same time his warnings about strategies of division sound uncannily relevant today.
En lire plus
4 personnes ont trouvé cela utile
Signaler un abus
Traduire les commentaires en Français