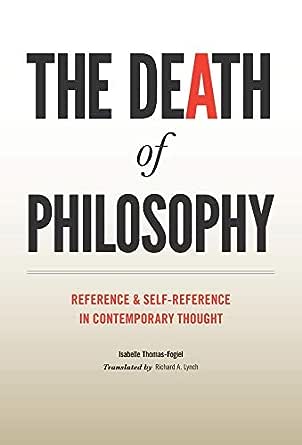 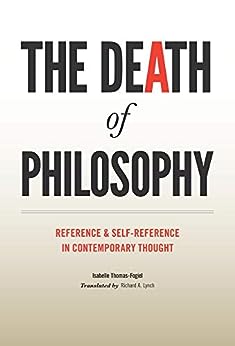 Isabelle Thomas-Fogiel is director of research in the Doctoral School of Philosophy at the Sorbonne. She specializes in the history of philosophy, the philosophy of science, and aesthetics and has published five books in French. Richard A. Lynch is instructor of philosophy at DePauw University and founder of the Foucault Circle. He has also translated works by Michel Foucault and François Ewald. --Ce texte fait référence à l'édition hardcover.

ITF's solution also gives philosophical history is proper place in the world of thought. Philosophy should be based on the questions asked, like "what is reality?" And its history supplies the laboratory results that provide the answers and one uses self-reference to evaluate them and create new ones. Aristotle, by the way, invented this approach. He called in endoxy. It went out of fashion about 200 years ago. Hopefully, it can make a comeback.

ITF's system is based on the concepts of "object" and "self-reference". Her language use is not consistent and I found it difficult to follow. The approach is set forth about, philosophy, at core, is about objects, with the most important objects being the intellectual systems that make truth assertions about reality, human nature, societal structure and entities and immaterial concepts and ideas. Self-reference is simply applies the intellectual system to itself. She calls the "object" sometimes the "said' and reference to it as "saying".
The first book I am aware of that simply presents the tests for evaluating intellectual systems makes truth claims is Roy Clouser's 2005 book "The Myth of Religious Neutrality." A far more detailed discussion of issue is contained in DFM Strauss' 2011 book "Philosophy: the Discipline of Disciplines." Clouser's book has the benefit of being written in an understandable manner, but it lacks applications (as this topic is tangential to its main topic). Strauss' book is excellent and discusses the issue with far more detail and sophistication than does ITF's, but is an extremely difficult read (with the emphasis on the extremely). I am convinced the issue ITF raises should be at the center of every undergraduate education. But, it is simply ignored as one or another professor present their favorite theory of truth regarding reality, human nature, social institutions and entities, concept and ideas. ITF has provided a path to reclaim truth in the academy and the world of thought. While not an easy read, this book is well worth it. Her ideas need a full and fair hearing.
I add a warning to this review. This is a book written by an academic philosopher for other academic philosophers. I first read the book about 2 years ago and frankly did not understand her position, due to her academic presentation style. After reading it the first time, I spent about 2 years of daily self -study of philosophy and then re-read it and, only after the additional study was I able to understand her position. For example, ITS assumes her readers possess a strong working knowledge of Kant, Helmholtz, Cohen, and Heidegger. For example, the analysis I provide about Kant's Transcendental Empiricism is given by ITS in a few words and assumes the reader is at least familiar enough with Kant to understand her meaning. And, she never calls it Transcendental Empiricism. Even with my preparation, on my second read, I had to go to secondary sources on Cohen (a Neo-Kantian thinker who founded the Marbury School of neo-Kantianism is the second half of the 1800's). It is a shame that a seminal work on such a crucial point is presented in such an difficult format.