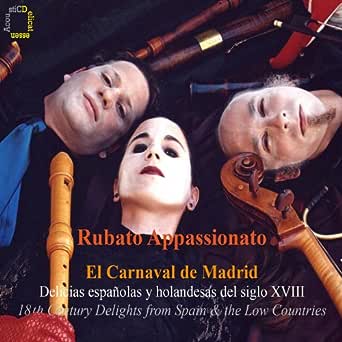 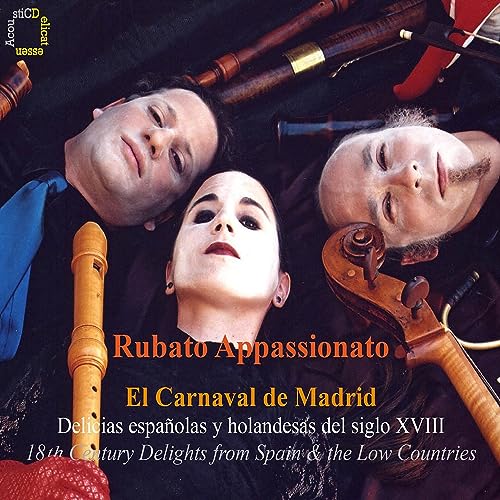 REVIEW BY RYAN ROMINE: "Many recordings begin straightaway—complete silence, and then whammo—music! Not so with this fantastic album by Holland-trained, Spain-based Rubato Appassionato. The first track of El Carnaval de Madrid begins with a breath! They invite us into their music and for the next seventy minutes play for us, their new-found friends, tunes that touch nearly every humour of human existence.

For being only three members strong, Rubato Appassionato creates an unbelievable variety of sound. Antonia Tejeda’s recorder playing is masterful in her ability to dance gaily one moment and then to evoke the deepest of pathos in the next. Sasha Agranov’s baroque cello playing is full of gusto. His continuo is not tasteful—“tasteful” is too academic, too sterile, of a word—it is instead that perfect blend of individuality tempered with friendly supportiveness. And Eyal Streett, baroque bassoon, plays with a glorious, achingly beautiful tone—when the music calls for it, that is. Furthermore, it is in tune(!), going to prove that while early music intonation can be used expressively, there is still a difference between good and bad.

When listening to this album, it becomes clear that these three friends (Tejeda and Streett are also married) are truly serving the music. They give each of the numerous dances (most of them by anonymous writers) their own personality, their own colors. So, when a particular dance calls for a gruff ferocity, it is there whole-heartedly.

When another tune needs a drum or some bells, one of the players picks them up and lends that instrument’s voice to the music. There seem to be no boundaries. Flutter-tonguing? Why not? Recorder glissandi? Sure!

While one could spend the rest of the review combing through each piece, it may be better to simply point out some favorite moments:

The opening to the track seven “Gigue” gives the wonderful impression of the players getting ready to perform the piece proper (akin to the opening strumming of the guitarists at a rock concert). Streett’s first entrance on the tune a few seconds later is simply magnificent.

Streett performs the “Sarabanda Largo” from Willem de Fesch’s Sonata VI with a mournfulness nearly impossible to replicate on a modern bassoon.

The opening and closing glissandi of Sach dels gemechs is pure, delightful, genius.

The sheer breath of Tejeda’s color, technique, and stamina is put on grand display in the album’s last track—the tour de force Partes de Folias (you will recognize the tune, no doubt).

We should all hope to hear much more from these fine performers over the coming years".

REVIEW BY PAMELA HICKMAN: “The opening work is a Corrente and Ballete, played with stylistic and stylish verve, the bassoon and ‘cello furnishing a warm, mellow and solid bass for Antonia Tejeda’s fresh, energetic and easeful playing that is fired with temperament.

In “La turca” (The Turk), Streett reminds us of the non-European origins of this dance association in his evocative, somewhat oriental-sounding ornamented melodic introduction. “La miscellanea” (The Miscellany) presents two alternating dances, bristling with early music features – the bass drone and an early fiddle double-stopping effect, the latter played with pizzazz by Tejeda. Returning to each of the dances offers a new listening experience worth waiting for.

...In a Gigue, based on the Greensleeves theme, the artists use their musical fantasy to create a canvas rich in invention, with the ‘cello plucked to create a lute effect, reflecting the English origins of the theme. Following the Murky, a dance which ... begins with a curious ‘cello solo to a dotted bassoon accompaniment, the players pay due respect (infused with a touch of humor) to the higher social standing of “De Graven van Holland” (The Counts from Holland) (...) Tasteful and economical use of percussion enhances some of the dances.

... In typical Rubato Appassionato style, the players’ performance of it is colored variously, the bagpipe drone is ever present, with the melodic line passed from one player to another. To complete the picture, we hear the “piper” filling the air bag prior to the piece and the bag deflating on its conclusion.

Moving into art music, Streett and Agranov perform Dutch composer and violinist Willem de Fesch’s (1681-1761) Sonata VI in C major ... from XII Sonate (Amsterdam 1725). The artists begin by “preluding”, a common improvisational practice “just to feel at home in C major before the piece actually begins” in Eyal Streett’s words. In the Allegro Commodo movement, graced by Streett’s mellifluous playing of the upper line with a gentle inégal sway, Agranov’s elegant bass lines give harmonic support and elegance, agility and virtuosity, never obstructing the lucidity and expressiveness of the performance. Contrasting the poignant Sarabanda Largo, the artists present the Gavotta Allegro with buoyancy and the wink of an eye. The same sense of well-being continues on into the final two Minuettos, in which rhythmic give-and-take lend natural spontaneity to the written note.

The CD ends with a lengthy set of La Folia variations (Partes de Folias) based on those in the Biblioteca de Cataluña, Barcelona. The opening verse of the well-known harmonic-melodic ostinato, played pizzicato on ‘cello, sets an affecting and thoughtful atmosphere, the starting point from which the artists explore the large gamut of moods offered by the music, creating countermelodies and transitions as they go. Exploiting the very many techniques, timbres, combinations and possibilities of their instruments and their own invention, the players pace verse beginnings and endings sensitively; the music’s message here (the players avoiding the reckless speeds and cold acrobatics commonly heard in many performances of La Folia variations) is that the La Folia subject is not just sheer folly, that it has a noble side to it.

The beauty and depth of Rubato Appassionato’s performance can not be attributed solely to the artists’ knowledge of style, superb technique and intonation; it emanates from their natural aptitude at improvisation, their expressiveness, fine-tuned listening and a rare sense of teamwork. Their sound quality is one of the rare treats heard in today’s performance of early music."