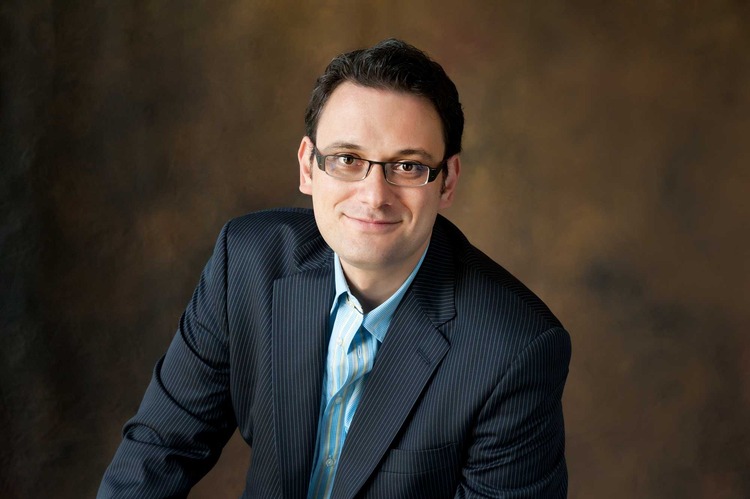 Evangelist Marketing: What Apple, Amazon, and Netflix Understand About Their Customers (That Your Company Probably Doesn't) (Anglais) Relié – 3 janvier 2012

Alex Goldfayn is a secret weapon marketing consultant, advisor and speaker for the top consumer electronics manufacturers in the world, and their agencies. He helps clients with their brand strategy, marketing, messaging and positioning. Alex's clients include Blackberry, T-Mobile, Virgin Mobile, Sony and TiVo. Alex is a former syndicated technology columnist for the Chicago Tribune. He lives in the suburbs of Chicago with his wife and children.
Commencez à lire Evangelist Marketing sur votre Kindle en moins d'une minute.

Josh Lowry
5,0 sur 5 étoiles HIGHLY Recommend Evangelist Marketing
Commenté aux États-Unis le 24 mai 2012
Achat vérifié
I highly recommend Alex Goldfayn's book, Evangelist Marketing. While the primary focus of the book is successful marketing in the consumer electronics industry, the majority of Goldfayn's advice is equally applicable to B2B. For example, when you examine marketing communications, most lead with the company and the product, as well as features and specifications. Many times these communications are written by engineers who are brilliant at building great products, but lack the necessary marketing skills to effectively translate how they will make the consumer's life better. This is equally true in B2B. Goldfayn helps connect the dots by providing analysis and recommendations for many of these communications. He also provides several examples of best-in-class marketing from companies like Amazon, Apple and Netflix to further illustrate his key points. I highly recommend this book because it truly makes you think (and re-think) how you are communicating to your customers. In fact, I literally stopped readying and started revising a marketing message during one of the many light-bulb moments that I experienced. Evangelist Marketing is a great read.
En lire plus
2 personnes ont trouvé cela utile
Utile
Envoi de commentaires en cours...
Merci de votre commentaire.
Malheureusement, nous n'avons pas réussi à enregistrer votre vote. Veuillez réessayer
Signaler un abus
Traduire les commentaires en Français

Jason Gill
5,0 sur 5 étoiles Great insight, great read!
Commenté aux États-Unis le 5 février 2012
Achat vérifié
The insight into marketing and the logic of marketing provided in this book may be centered around companies whose business is technology driven, but I found the insight to be extremely relevant for someone whose work is not focused on technology (even though technology touches each of us just about every second of our lives). I have known Alex for a long time and observed his evolution as a critic, advisor and thinker, and I have to say that this edition does not disappoint! Can't wait to see how the world of evangelical marketing has evolved when the next edition/tome is released.
En lire plus
Utile
Envoi de commentaires en cours...
Merci de votre commentaire.
Malheureusement, nous n'avons pas réussi à enregistrer votre vote. Veuillez réessayer
Signaler un abus
Traduire les commentaires en Français

Shawn Casemore, Management Consultant
5,0 sur 5 étoiles This book is a must read for anyone involved in marketing or the tech industry.
Commenté aux États-Unis le 4 janvier 2012
Achat vérifié
Alex Goldfayn is the "Master Marketeer," and in this book he lays out his proprietary and successful marketing processes that are proven to create "evangelistic"customers.

This book is a must read for anyone involved in Marketing or the tech industry. The return on your investment is priceless.

Alberto
3,0 sur 5 étoiles Interesting for the tech savvy
Commenté aux États-Unis le 16 mars 2012
Achat vérifié
I bought this book basically because I was persuaded by some ads, tips from colleagues and the mention of the computer giant companies. I'm not disappointed, although I have this felling the book was not for me. I was provided with enough information to get entertained along the reading of the book, but apart from the amusement, it is still written for owners of compute-related companies. For those whose curiosity brought them here, you will still have the feeling you are reading something which was meant for someone else.
En lire plus
Utile
Envoi de commentaires en cours...
Merci de votre commentaire.
Malheureusement, nous n'avons pas réussi à enregistrer votre vote. Veuillez réessayer
Signaler un abus
Traduire les commentaires en Français
Charger plus de commentaires internationaux

DG
1,0 sur 5 étoiles A not-very-good rehash of other books
Commenté aux États-Unis le 13 mai 2012
Achat vérifié
Writing a book is hard. Writing a great book is even harder. Alas, this is not a great book.

Alex's book breaks no new ground, and even conveniently misses some key facts. It's not that the Emperor has no clothes here, he's just dressed just like every other book on this topic. Books that have been in publication for well over 10 years. Unfortunately, rather than standing on the shoulders of the authors that have worked hard before him, Alex chose to stand on their toes.

I don't think the poor quality is the result of Alex trying to deliberately mislead, I think it's the result of being a journalist that sees these companies from the outside in, then suddenly thinking he has a better idea, without really showing the evidence to back it up (or performing rigorous research). His catch phrase, that companies are "likely leaving millions or billions of dollars on the table," never gets quantified. More to the point, big companies walk away from "piles of cash" all the time, and so do some small ones. Good leadership comes from knowing when to walk away from the poker table, and that happens more often than many think.

I wrote copious notes as I was reading Alex's book, but I wanted to talk about two gross errors that I thought were interesting. The first was that engineers drive the marketing in the consumer electronics business, and the second that companies fail to engage consumers early and often in the design process.

At one point, Alex proclaims, "Most consumer electronics companies start their marketing process with their engineers--exactly the wrong people for this." - Um, no. Engineers don't build things out of thin air. There is a large process in place long before an engineer writes his first line of code or designs his first chip. The people that are involved formulate ideas that come from the experience that the creators want people to have. And, yes, marketing people ARE involved. But they're also involved in tens, if not hundreds of other projects. Sometimes, companies have a very narrow range of SKUs that serve a broad purpose. When this happens, more effort can be applied to iterating on how the product relates to their target audiences. This means that when Apple makes a phone, a lot of marketing and design people can operate in a laser-focus, because it's not twenty phones and form factors, it's one phone. Conversely, markets that depend on technology churn (telecoms in particular), cannot apply economies of scale, and many times a product launch might be left in the hands on one young marketing person who is given a "sink or swim" task of launching a product. Thinking that engineers drive the marketing process shows a gross misunderstanding of the complete design process.

Let's also cut to the chase on how marketing jobs really work out in companies: Whoever has the biggest ego wins. That might seem callous, but if an engineer, project manager, or "think tank expert" has strong passions about a product they are personally invested in, AND they have the opportunity to influence the marketing direction, it's gonna happen. The nature of launching products is driven far more by leadership (good, bad, or otherwise) than by rational logic. Marketing is, above all, a human process.

Marketing failures, like the Zune, can be found in abundance, but it sometimes takes more than marketing to create a failure. Alex cites the technical jargon in the PS3 material as poor marketing, but companies market to different segments, and it's perfectly fine to reach out to the "gearheads" and lay it on thick. They eat it up, and it's as much of an influence to their purchasing decisions as it is for others to couch the product in an "experience" viewpoint. In fact, this was Sony's best opportunity to lock in a new group of consumer evangelists for the PS3 - passionate game players that thrived on gaining the latest technology for their games. Sony's failures in marketing didn't lie in the technical jargon. To begin with, Sony's price point at launch was far out of line with the competing Xbox. This forced Sony to position their product as a premium purchase, justified by the presence of a Blu-ray player in the product (nevermind that the SCE president at Sony actually said the initial price point was "probably too cheap"). This didn't stand well with consumers for several reasons: 1) Blu-ray was still a new format, competing with HD-DVD. The price premium was seen as a deterrent, rather than an incentive to start buying Blu-ray DVDs, 2) The choice of SKUs was confusing, and only one model offered backward compatibility with existing PS2 games (which they would later remove), meaning two Playstation gaming systems would have to remain hooked up to their TVs, one for the new games, one for the old games, 3) Sony's approach to marketing the PS3 was extremely poor to both consumers AND game developers, resulting in a poor selection of games at and following the launch of the PS3, 4) Sony's executives continued to speak in contradictory ways, or even outright deny facts that consumers and journalists knew, further distancing their core gaming audience from the product itself. Technical jargon was the least of Sony's woes -- they were _willfully_ disconnected from the entire consumer feedback loop, and their core consumer evangelists (game players), weren't driven by the presence of a Blu-ray player. In the end, the PS3 managed to carve out space in the console market, but has often lagged behind the Xbox and the Wii. The PS3 didn't really gain traction, in fact, until Sony's massive studio holdings brought an inevitable end to the HD-DVD market.

The second area is even more interesting, Alex claims "Consumers are missing from your marketing: they should be the centerpiece, but they are almost never involved in the creation of marketing strategy in our business." On the other hand, he claims that consumer focus groups are a waste of time. So, his solution is that _everybody_ spend at least 15 minutes a day talking to customers. Admirable, but distracting and inefficient. Why? Because true innovation doesn't come from customers. Their frame of reference is only based on what they know, not of a unique future visualization. This is precisely why Apple succeeded under the helm of Steve Jobs. He knew the future of technology came from hiring the right people, visionaries that not only had a genuine passion for their craft, but also a passion for creating something they and their customers would love. But let's not get joyfully teary-eyed over Apple's success, because Apple, too, has had their share of failures and missteps. Look no further than the misguided application model of the original iPhone for an example.

Let's step back a moment and try to grasp the gem of what Alex wants to communicate throughout his book: Customers are important and should be a key element of the overall design and development process. If this is the core of Alex's book, that markets are, in fact, conversations, perhaps Alex should go back and read "The Cluetrain Manifesto." Crafted in 1999, it gives the same message - for free. Indeed, Alex's book reads like an expansion of the 95 Theses presented in that book, and yet he cites no reference to it, nor to any other equally useful book in this category, like "Naked Conversations." I'm not accusing Alex of plagiarizing here, but he certainly seems to have an abundance of hubris.