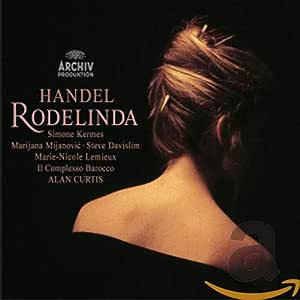 HomeSpa
5,0 sur 5 étoiles A Brilliant CD
Commenté au Royaume-Uni le 28 mars 2014
Achat vérifié
We purchased this CD before we went to see Rodelinda at the London Colisium. It was quite expensive for a CD for an Opera, but when it arrived it was worth every penny, even more so, after seeing the live performance. This was also good value from this supplier and arrived in time, with quite short notice. Thank you
En lire plus
Une personne a trouvé cela utile
Utile
Envoi de commentaires en cours...
Merci de votre commentaire.
Malheureusement, nous n'avons pas réussi à enregistrer votre vote. Veuillez réessayer
Signaler un abus
Traduire les commentaires en Français

E. L. Wisty
5,0 sur 5 étoiles Handel's and Curtis' finest (three) hours?
Commenté au Royaume-Uni le 16 janvier 2012
Achat vérifié
The Rodelinda of 1725 has always been one of Handel's most admired operas, and in the hands of Curtis and his chosen performers you can hear why.

The libretto derives from a sequence of works beginning in the 8th century with Paul the Deacon's Historia Langobardorum, adapted by Pierre Corneille for his play Pertharite, roy des Lombards, this being converted into an operatic libretto by Antonio Salvi, which Nicola Haym modified for Handel.

Bertarido the King of the Lombards has been dethroned by Grimoaldo, and is believed to be dead. His morning wife Queen Rodelinda is under pressure from Grimoaldo, who has put aside Bertarido's sister Eduige to whom he was betrothed, to marry him and thus legitimise his usurpation. The Duke Garibaldo, a friend of Grimoaldo has his own designs on the throne and uses the wronged and vengeful Eduige towards his own designs. Bertarido however is not dead, and returns in disguise intending with the help of Unulfo, ostensibly adviser to Grimoaldo but secretly ally of Bertarido, to regain the throne. Bertarido however, in clandestinely observing the constant and defiant Rodelinda, wrongly believes her to be unfaithful to his memory. Now listen on...

There's no weak link in this recording. Whilst on some other discs I can understand why contralto Marijana Mijanovic might divide opinion, but here as Bertarido she is superb and cannot comprehend why anyone might think otherwise. And then there's gorgeous soprano Simone Kermes as the eponymous Queen and contralto Sonia Prina solid as always in the part of Eduige. Tenor Steve Davislim and bass Vito Priante are suitably threatening as the respective nasties Grimoaldo and Garibaldo. Even contralto Marie-Nicole Lemieux, who has for the most part never got me excited to say the least, has a rather good showing here as Unulfo. The ensemble Il Compresso Barocco play Handel's music with aplomb, and you feel that Alan Curtis has got everything spot on here. Sound quality is excellent too.

Myron C. Mccormick
5,0 sur 5 étoiles Exquisite Handel
Commenté aux États-Unis le 22 août 2013
Achat vérifié
As a relatively new enthusiast of opera I am slow to grasp the full majesty, beauty and drama of a masterpiece. I am an even newer enthusiast of baroque opera and Handel. That said, I am still working with this opera and these singers. It is a labor of love and I am quite confident that this opera/recording will continue to entrance me for years to come.
En lire plus
Utile
Envoi de commentaires en cours...
Merci de votre commentaire.
Malheureusement, nous n'avons pas réussi à enregistrer votre vote. Veuillez réessayer
Signaler un abus
Traduire les commentaires en Français
Charger plus de commentaires internationaux

elsiejohn
4,0 sur 5 étoiles Handel's Rodelinda
Commenté aux États-Unis le 24 septembre 2005
Achat vérifié
This new CD is obviously thoroughly researched, and the addition of Handel's alternative arias is a real bonus. While the CD booklet touts the exceptional abilities of the young singers, their singing at times is rather lackluster, and there's a feeling of detachment with the text. Their coloratura work is definitely above average, but the voices tend to be small and sometimes constricted at the top and bottom. Compared to the Sutherland/Baker recording [D'Oro label--available at Amazon.com] it pales in comparison. The young Sutherland and Baker infuse their singing with incredible virtuosity and a total involvement with the drama. Too, any Marilyn Horne or David Daniels recording of "Vivi, tiranno" is a real tour-de-force performance over the neat-but-gutless version on this CD.

The subject of a college opera class I teach was Rodelinda, and, initially excited at finding this new CD, I ended up mostly using Sutherland/Baker/Horne/Daniels recordings. This CD is the perfect recording for musicologists and those who prefer period instruments. The young orchestra performs with precision, but,as with the singers, there's a certain excitement lacking.

If you have the Sutherland/Baker recording (or any of the English language versions) then this new recording would make an excellent companion.

Harry Sillen
3,0 sur 5 étoiles GREAT MUSIC, A DISAPPOINTING RECORDING
Commenté aux États-Unis le 26 juin 2014
Achat vérifié
Alan Curtis said in an interview some years back that he had not heard a satisfactory recording of Rodelinda, so he was going to record one. I am sorry to say that this is not one either. The orchestral playing is wonderful, and the style is something that Mr. Curtis is well known for. However, his two principals, Simone Kermes as Rodelinda and Marijana Mijanovic are totally unacceptable in their respective roles. Especially Mijanovic had in her short career ruined several otherwise fine recordings before disappearing from the scene altogether. Rodelinda seems to be one of those operas that never get a great recording.
Rodelinda has been one of my favorite Handel operas ever since I got hold of a recording in the 1970s by Brian Priestman, recorded in, I believe 1965. The style is now dated, of course, and, the Rodelinda, Teresa Stich-Randall is totally miscast. However, there is Maureen Forrester as a splendid Bertarido. In 1973, the Netherlands Opera staged Rodelinda during the Holland Festival. I saw two of those performances in Amsterdam with Joan Sutherland in splendid voice. It was also the first time I heard Huguette Tourangeau, the Bertarido, and Eric Tappy, the Grimoaldo. A radio recording of this exists on Bella Voce, and is worth looking for. The sound is what you expect from a radio broadcast of that period. Unfortunately, the recording industry (where I worked at that time) was going through a difficult time, so opera recordings were put on hold and the Sutherland/Bonynge team was not allowed to record the work. Ten years later, in the early 1980's they did get the chance, but by that time, Sutherland's voice was no longer in the best of shapes, and Tourangeau had lost most of hers, and was relegated to the small role of Unulfo. Furthermore, the opera was heavily cut. Despite all that, it remains one of the more theatrical performances of the work. There was also a recording on Deutsche Harmonia Mundi, but with very anemic sound and not very interesting performers. A very good performance was recorded some time later during the Göttingen Handel Festival in Germany with Dominique Labelle, Robin Blaze under Nicholas McGegan. This set is very hard to find, being available only directly from the Festival. There are three DVD recordings; the first with Dorothea Röschmann and Michael Chance who seems to be having a bad day. The staging is what you expect from German theaters, lots of guns and black leather. The Metropolitan Opera production is a far nicer production and more in tune with the story. Renee Fleming produces glorious sounds of course, but seems to walk through the proceedings as if she doesn't know what's going on. Andreas Scholl is very good as Bertarido, but he is much more involded in the other DVD recording, from Glyndebourne. The Metropolitan Opera's stage is far too large for an intimate opera like Rodelinda and the gestures the singers have to resort to don't look very convincing on the small screen. The best of all is Glyndebourne, with Anna Caterina Antonacci as Rodelinda and Andreas Scholl as Bertarido and the very good Umberto Chiumno as Garibaldo. The staging does not offend and the singing and playing is excellent, being conducted by William Christie, one the world's great Handel conductors. But, if you want to hear Bertarido's three magnificent arias sung with great panache and impeccable vocals, try to find a recital record by Marilyn Horne where she sings all three. An enterprising British company leased the recordings in the 1990's for a CD release, but that has long since disappeared. The recordings are available now only in Decca's set of all Horne's recital discs in a box set. But if you find them, you'll be glad you did.