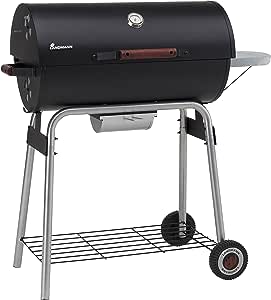 Stephen Bowe
5,0 sur 5 étoiles Excellent BBQ
Commenté au Royaume-Uni le 23 juillet 2015
Achat vérifié
My search for a decent BBQ lead me initially to Weber. A few of my friends have a Weber and I was set to purchase one as I know the build quality of such the brand is really good. On my travels though, through several review sites Landmann BBQs kept cropping up. I decided in the direction of Landmann as the style of BBQ suits me better. I prefer the drum/tray style that Landmann do, over the Weber kettle shape. Which lead me to purchase the Landmann Taurus 660.

Having read mixed reviews about the Landmann Taurus 660, I was sceptical at first. Reading through seeing that the paint peels, the charcoal grill buckling under the heat, it being scratched when it was out of box, and problems with assembly. I have had a few BBQs out of it so far and I have not had a problem with any of the issues. It was packed securely. No obvious defects on the product. There was just one little gripe with the product, but certainly not to give it less than 5 stars. The warming rack bar that connects it to the lid is too short and keeps slipping out. Now I do not know if this is by design or manufacture fault but on one side seems to have 2 inches sticking out and the other side nothing at all. It just seems to fit, barely. The paint is what looks to be a powder coating, which is good.

Apart from that, it is a solid build. Which is evident from the weight of the box you get. I would recommend that it is set up by 2 people. One person can build it, but it is a struggle due to the weight of it and the awkwardness of the BBQ parts.
With normal use the BBQ is fine I have used it between 2 hours to 6 hours a time and no defects explained in previous reviews happened. As the bad reviews stated they have experienced peeling of the paint and the charcoal grill buckling and warping.

I decided to see what it takes to do what was described. I loaded it with fuel (about 10KG of Charcoal) then adding another 5KG about 2 hours after it. I can say that it survived for about 4 hours without any cosmetic defects. After that the paint burnt off down to the prima on the drum, then the charcoal grill warped, and the food grills have suffered minor cosmetic damage, I have no idea of the temperature range but it was off the inbuilt thermometers’ range. The morning after the next, the coals were still warm, which leads me to believe it was hot!

The cooking area really is big, you can quite easily cater for 12 plus people on it. It is sturdy, with the thermometer attached to the lid you can tell when it is time to add meat and start cooking on it. Also the fact that you can move the coal up and down to alter heat is also a massive bonus, as you are not moving the food, meaning an over enthusiastic sausage doesn’t roll into the coals or worse, the ground!!! The side mounted tray feels flimsy but seems to cope will with a medium sized tray of meat on it. Also the ash removal tray is a good idea. It help keeps the BBQ lasting longer. The food grill is in 3 pieces which makes it easier to add coals while still cooking and warming food.

All in all, if you use the BBQ properly it will be fine, obviously though through use you will get heat marks on the drum but that is why there are paints to treat it. It is normal, through normal uses. There is even a guide on how to BBQ included and how to look after it. I enjoy using it. I can see me having this sturdy bit of equipment for years.

S.Jock
4,0 sur 5 étoiles Taurus 660.
Commenté au Royaume-Uni le 7 août 2018
Achat vérifié
What i like most about this bbq is that there are 3 separate cooking grills which are easily removed and cleaned. If just cooking for 2 then all 3 don't need to be used. Most often I use just 2 which reduces the cleaning. There is the additional rack used for keeping food warm but unless you are cooking for loads then you don't really need to use it. I only fit ours when there is loads of cooking to do and all 3 grills are in place.
What I don't like is the fact that there is no real place to catch grease that collects on the front and back sills where the grills sit. If the bbq is not perfectly level then this grease will run along the back and front, runs down into the bottom area where the bolt attaches the side stay and then drips onto the floor. You could always level the bbq by packing up the legs but the grease is a slippery blighter and still sneaks down there if not perfect. Difficult to stop this happening but I partly solved the problem by removing the bolt and hanging an empty tin underneath which now catches most of the grease. If the side seam was properly welded rather than just tack welded then the grease would have nowhere to drip out. Might try an epoxy filler once the season is over and I get it ready for storing through the winter.
All in all it is ok and cooks well though I would probably look again for something else next time. This was probably the best charcoal bbq that I could see from what is on the market just now as the trend seems to be going the way of gas. Once I get it adapted to the way I want it then hopefully it will last a while.
En lire plus
4 personnes ont trouvé cela utile
Utile
Envoi de commentaires en cours...
Merci de votre commentaire.
Malheureusement, nous n'avons pas réussi à enregistrer votre vote. Veuillez réessayer
Signaler un abus
Traduire les commentaires en Français

Sharon Shinwell
3,0 sur 5 étoiles Good cooking results but dripping fat an issue
Commenté au Royaume-Uni le 8 août 2019
Achat vérifié
Not too difficult to put together but make sure you get the legs the right way round. First one arrived dented, Amazon replaced it but pick up old one was badly organised. Used twice up to now, once for closed lid cooking, once with lid open. No complaints with results but there are two faults with the design. Two bolts are in the base at either end, fat runs along tray and drips through these onto the floor. Had to hang can uner the bolts, but worse still, fat drips off the open lid if you store food on the rack, which hangs over it. There is, no way of stopping this and it's made a real mess of our patio. I can also see that any condensation or fat that gets on the lid would automatically run off the back edge as soon as the lid is put down, as the lip at the back hangs outside the base. Really bad design faults and spoils an otherwise good bbq.
En lire plus
Une personne a trouvé cela utile
Utile
Envoi de commentaires en cours...
Merci de votre commentaire.
Malheureusement, nous n'avons pas réussi à enregistrer votre vote. Veuillez réessayer
Signaler un abus
Traduire les commentaires en Français

TwentyThree
1,0 sur 5 étoiles OK BUT.....
Commenté au Royaume-Uni le 18 septembre 2019
Achat vérifié
I have used this bbq many times with great results but can only give one star because.
Bad
*like other reviewers stated it has fitting on bottom of drum ends which creates a gaps where grease drips down, it has made a disgusting greasy mess on my patio which is difficult to clean.
*enamel like coating on grill is starting to chip away. In hindsight I should have brought one with stainless steel grill only.
*Ash draw is fairly pointless.
Good
*Drum material is slightly thicker than cheaper models so would potentially last longer.
I love cooking on drum bbq and this is no different but I have had same results on my much cheaper versions without the above issues.
En lire plus
2 personnes ont trouvé cela utile
Utile
Envoi de commentaires en cours...
Merci de votre commentaire.
Malheureusement, nous n'avons pas réussi à enregistrer votre vote. Veuillez réessayer
Signaler un abus
Traduire les commentaires en Français

On the plus side, it offer a large cooking area, a warming rack and a side table. Being able to close the top lid helps control the flames without having to sprinkle your food with water all the time.

The main bugbear for me is a poor quality of steel that is used in a charcoal grater and the perforated plate underneath. After the initial two years some of the grater joints went and the grater was replaced under the terms of the warranty. One year later the perforated plate that stops smaller burning coals from falling into the ash drawer suffered from a burn-through.

The Customer Services team promptly handled both warranty claims, however - had the producer used better quality materials - there would have been no reason for submitting them in the first place. I also expect to have to buy a new BBQ after my five-year warranty expires or start paying for the replacement parts. One really ought to make a judgment call whether £40 per year for five years is a fair price for a BBQ.
En lire plus
Utile
Envoi de commentaires en cours...
Merci de votre commentaire.
Malheureusement, nous n'avons pas réussi à enregistrer votre vote. Veuillez réessayer
Signaler un abus
Traduire les commentaires en Français
Charger plus de commentaires internationaux

J. B. Craven
1,0 sur 5 étoiles Incorrectly manufactured / Home alterations needed
Commenté au Royaume-Uni le 3 juin 2017
Achat vérifié
Although this is a very good sturdy BBQ, all the fittings on the lid were on the hinge side rather than the front, I didn't actually notice this until almost had it fully built. Rather than dismantle and send back I just re-drilled and mounted the handle, thermometer and Landmann badge on the correct side, then filled the old holes with blanking bolts.
En lire plus
6 personnes ont trouvé cela utile
Utile
Envoi de commentaires en cours...
Merci de votre commentaire.
Malheureusement, nous n'avons pas réussi à enregistrer votre vote. Veuillez réessayer
Signaler un abus
Traduire les commentaires en Français