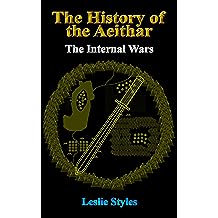 The History of the Aeithar - Book 01 - The Internal Wars (English Edition) 11 oct. 2013
par Leslie Styles
3,58 €
The History of the Aeithar: The Aeithar are at war. Always at war. From the very beginnings of their race to the very end, they have fought, amongst themselves and against others. Their wars have shaped the race, moulded it, and driven their development. Some wars, however, and some advances, were more important than others.

The Internal Wars: Life in Aeithan had been good. The Aeithar had been few, and the resources plentiful. Now, however, the ratio has swung the other way. What began as minor skirmishes over food or wood soon escalates into battles, and before long the spectre of full-blown warfare looms. And when a childhood game turns out to hold the key to untold power, the battle for minds becomes as important as that for land.

The Internal Wars is the first book of the epic History of the Aeithar series, which charts the rise and fall of the Aeithar race, from their beginnings as an Iron Age civilisation to their end in the far future. This book covers the earliest period, the beginnings of warfare, and the discovery of magic.

To find out more about the Aeithar series, and to download Chapters One to Five for free, please go to