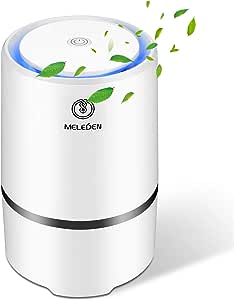 Tucker
5,0 sur 5 étoiles ⭐️⭐️⭐️⭐️⭐️ Air purifier
Commenté au Royaume-Uni le 27 mai 2020
Couleur: Purificateur D'air.Achat vérifié
I really didn’t think it would be as good as it is, but I was proved wrong.. I have asthma. I suffer from pet hair dust allergies. I have had this purifier now for 3 days . It’s bloody marvellous. I can actually breathe better I’m not waking with headaches, or streaming eyes, plus I am getting a better night sleep. I also have Hayfever.. it kills the pollen leaving fresh air, this I would definitely recommend.. product gets 5 ⭐️⭐️⭐️⭐️⭐️ It’s now two months old have this is great . I hope you all like it & you’ll see what a difference it makes to your life for a small price.. it’s now 13/7/20 I have cut down on my inhaler salbutamol, I’m not requiring it as much, This purifier has dramatically changed my life for the better, I’m going to order another 1 as I spend a lot of time in my conservatory. I personally feel this device has helped me. I don’t know how anyone els feels bit would be glad to read your reviews.
En lire plus
38 personnes ont trouvé cela utile
Signaler un abus
Traduire les commentaires en Français

Whovian711
5,0 sur 5 étoiles Great for cleaning the air
Commenté au Royaume-Uni le 28 avril 2020
Couleur: Purificateur D'air.Achat vérifié
It's very quiet and does a great job of cleaning the air, we have it running in our bedroom as we both suffer sinus problems. A must for any allergy suffers. Got a filter refill for £9.99 on Amazon
En lire plus
28 personnes ont trouvé cela utile
Signaler un abus
Traduire les commentaires en Français

Tibs
1,0 sur 5 étoiles Waste of money.
Commenté au Royaume-Uni le 28 juin 2020
Couleur: Purificateur D'air.Achat vérifié
So I got an air purifier as it could help my hayfever. If you're a fellow sufferer, I don't need to tell you how annoying it is to wake up with sinus problems and peel off your stuck closed eyelid off your face (which can be painful). Going by reviews this seemed like a decent one, at a reasonable price. Oh, boy was I wrong.

So the first couple of weeks, having it constantly connected in the mains, I had no change to hayfever. I though, alright maybe it takes awhile to work, so I gave it a bit longer. It did not. Now, 3 and a half weeks later, I'm saddled with a glorified fan, with some fancy filter at the bottom, which is clean, by the way. Now sure, I don't have any pets, but one of us does smoke, and not even that has been picked up by the filter.

As for its build quality, it doesn't look, nor feel cheap. It seems to be made of decent plastic, and I feel like it survive a hit or two. Also, as it's kind of glossy, you might think it would look or get dirty quickly, thankfully it does not. It's been touched, and scratched several times, with not a single mark. As for its user friendly-ness to replace the filter, I honestly cannot add anything useful. Another benefit of this being made of mostly plastic, is that it's very lightweight. It's very easy to move, and pick-up, even one handed. This isn't just a positive, however. The device is so light, it doesn't really stick to the surface it's on. It's far too light, and given a knock, can go flying. I would've liked to see some kind of rubber at the bottom to aid in traction, solving this issue. Going away slightly from its sturdiness, I would've liked to see a USB-C connection for power, instead of the now dated, micro-USB. Though that is kinda knit-picking, and for now still kind of understandable.

Now for it's sound volume. It's not like I've got some fancy tester, but it is certainly audible. I can hear it over headphones set to a reasonable volume, and it's certainly too loud to sleep near. I've had cheaper, and more expensive fans do a much better job pushing/pulling air, and at a more pleasant volume, than this. When I eventually grew sick of the sound of the fan, and knew it didn't do much, if anything I put it to the complete other end of the room, which I found it more reasonable there.

On the matter of sleeping, if the volume of the fan wasn't annoying enough, you also have the blue LED to deal with. Sure, it can be dimmed when you go to bed, but it's still too damn bright. It NEEDS to be turned off, and quite frankly is a waste of the cost of the product, and the extra (small) amount of power needed to run it. If it cannot be turned off, then at the very least allow the user to change the colour. The blue light does seem to be eye-catching, whereas something like a red, or brown might be a bit more reasonable. I have enough blue light from my phone, never mind this.

Thank you for taking the time to read this. If you've found it helpful, please let me know. If not, let me know how I can improve. I take a few minutes out of my day to genuinely help folks buying products, that I myself found interesting/useful. Whether it's a good or bad product, I still want to write about it, if I have something to say. Please, have a lovely day :)

Ms. Yekaterina Kryzhhan
5,0 sur 5 étoiles Great for those who suffer a hayfever!
Commenté au Royaume-Uni le 8 mai 2020
Couleur: Purificateur D'air.Achat vérifié
My friend recommend me to use Air Purifier, as my son starter to suffer from Hayfever this year. It was strange, as he is not usually allergic to something and it's a first year he has blocked nose, red eyes and constant sneezing! My poor boy could not sleep properly due to this, so I decided to give Air Purifier a try. It didn't show result on first night, however we left it working in the room anyway and on second night my son can sleep much better. He still has some sneezing, but much less blocked and running nose. So we will keep trying to use it as it seems to help him a lot! Moreover, it's a compact and space-saver, and not as expensive compared to different models!
En lire plus
21 personnes ont trouvé cela utile
Signaler un abus
Traduire les commentaires en Français