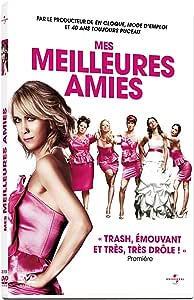 The Movie Diorama
4,0 sur 5 étoiles Bridesmaids is the pinnacle of modern comedy.
Commenté au Royaume-Uni le 18 septembre 2017
Achat vérifié
Bridesmaids is the pinnacle of modern comedy. Comedy not being my genre (at all!) I always go into one with extremely low expectations. I remember watching this for the first time and was blown away at how much it entertained me. I may have only laughed once or twice, which in itself is an achievement for a cold soulless individual like myself, alas I couldn't help but smile throughout its runtime. Now approximately on my tenth viewing, I still can't wipe that grin off my face. The story is pretty formulaic, a group of bridesmaids trying to outdo each other in order to be the greatest friend to the bride. What sets this apart is the smart writing. Kristen Wiig and Annie Mumolo outdid themselves. The dialogue is on point. Not once, not twice, all the time. There isn't a single line here that made me think "ohhh actually that didn't work". Sure the narrative is filled with scenarios that's just asking for slapstick comedy, but that's a given in any film of the genre. Whether it be the airplane fiasco, driving recklessly to get the attention of a police officer or the food poisoning bridesmaids outfit fitting scene (which, can I just say, is one the funniest moments ever). It all works! The genius writing makes for some memorable characters. Each bridesmaid has a different personality and are able to bounce off each other beautifully in order to create the laughs. All of the actresses were perfect, like honestly the best casting choices available. Kristen Wiig was painfully good. Rose Byrne is always a favourite of mine. Maya Rudolph was surprisingly funny. Even our very own Chris O'Dowd was spot on! Melissa McCarthy obviously was the standout. Director Paul Feig owns modern comedy, and Bridesmaids proves this. Some of the scenarios are stretched out for slightly too long in an attempt to force some more laughs. And apart from the formulaic plot, I defy anyone to say they didn't enjoy this...even on the smallest of scales! It's just fun to watch and has reinvigorated comedy. Perfect if you're feeling down or want a good laugh with friends.
En lire plus
9 personnes ont trouvé cela utile
Utile
Envoi de commentaires en cours...
Merci de votre commentaire.
Malheureusement, nous n'avons pas réussi à enregistrer votre vote. Veuillez réessayer
Signaler un abus
Traduire les commentaires en Français

smccran
3,0 sur 5 étoiles Chewing gum for the brain, in pink
Commenté au Royaume-Uni le 26 mars 2014
Achat vérifié
I'd heard a lot about this movie and had high expectations. Its decent enough, but I kind of wish I'd rented it. Its not something I think I'd go back to as the humour wasn't good enough to watch twice.

The film does have a female slant to it, but its not a 'womans' film, despite the pink packaging. Some of it is just a bit 'I'm going to be funny, look at me' and I prefer a more subtle humour.