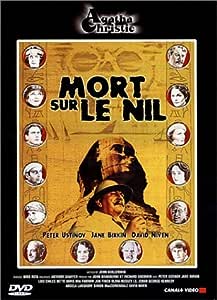 Kevin S.
5,0 sur 5 étoiles Death on the Nile - Blu-ray
Commenté au Royaume-Uni le 22 octobre 2017
Achat vérifié
It’s literally my favourite Agatha Christie adaptation of all time and although I’ve lost count of the number of times over the years I’ve seen it, I never get bored of it.

Taking a common Christie outline of a group of characters in a specific location, a murder and a reason for almost every character to want the victim dead, Hercule Poirot is left to deduce the truth!

For me, the film is just a perfect combination of a complicated whodunit script with a healthy dose of humour mixed in, an absolutely perfect cast across the board (Angela Lansbury in particular is outstanding as a boozy novelist of dubious romantic fiction) and an exotic grand location in which to bump the cast off. The new Blu-ray edition gives the film a terrrific extra shine making it look brand new again.

Extras run about an hour, comprising a 22 minute vintage featurette consisting of interviews with cast and crew during production (which was on the previous DVD release) alongside new interviews with costume designer Anthony Powell, Dame Angela Lansbury and producer Richard Goodwin. There’s also a couple of still image galleries to flick through.

Mrs Ruth A Halsall
5,0 sur 5 étoiles Vintage who done it with many twists
Commenté au Royaume-Uni le 22 novembre 2016
Achat vérifié
This is a vintage movie based on the writings of a writer noted for creating good crime stories. The story is full of intrigues twists and turns in order to keep you interested in the plot. There are many plots and sub plots. There are many recognisable faces from the international entertainment scene. Wonderful backgrounds and pretty costumes which all the cast wear. The society it is concerned with is the late nineteen twenties and early thirties. It also deals with wealth on many levels. Who is richer and who is more important is also discussed in dealing with the plot. It is an entertaining viewing and a good mystery if you hadn't seen it. Fascinating product. Thanks
En lire plus
4 personnes ont trouvé cela utile
Utile
Envoi de commentaires en cours...
Merci de votre commentaire.
Malheureusement, nous n'avons pas réussi à enregistrer votre vote. Veuillez réessayer
Signaler un abus
Traduire les commentaires en Français

Rick Brindle
4,0 sur 5 étoiles Unlikely they still make them like this
Commenté au Royaume-Uni le 3 juillet 2017
Achat vérifié
A really good period drama, made before CGI. Filmed on location in Egypt, and all the usual Agatha Christie dramas and curve balls are there. Peter Ustinov plays a great Piorot, and when you've got David Niven supporting, you know it's gonna be a treat. All the other actors are great. If you period drama, if you like Agatha Christie, this is for you.

peekayinhk
5,0 sur 5 étoiles A classic, and a rarity that improves on the book!!!
Commenté au Royaume-Uni le 8 janvier 2016
Achat vérifié
Linnet Doyle - filthy rich, shrewd, arrogant - has made a lifetime worth of enemies, but stealing her best friend's handsome new boyfriend is a new low. And jilted Jacqueline de Bellefort (Farrow) is not giving up without a fight. Stalking the newlyweds on their Egyptian honeymoon, Jacquie is determined to insert herself in their every step, including boarding the elegant S.S.Karnak on a cruise down the Nile. So when Linnet is found murdered in her bed one night, Jacquie is the obvious suspect, despite her airtight alibi. And as things unfold, it appears that everyone on board has a reason to hate Linnet, and potentially a motive to kill her. So Belgian super-sleuth Hercule Poirot has a knotty case to untie, with the help of his old comrade Colonel Race.

Accept no imitations: this is fabulous, an absolute classic. The adaptation of Christie's (rather humourless) whodunnit vastly improves on the novel by tight plotting, and the injection of a healthy dose of camp. A stable full of Hollywood's biggest names chews the scenery to bits and they have a whale of a time while they're doing it. Peter Ustinov brings a dry wit to Poirot; Niven is stiff-backed and debonaire as Colonel Race. Bette Davis is a gorgeously grouchy old biddy with a penchant for pinching jewellery, constantly bickering with the incomparable Maggie Smith, hilarious as her sniffy companion, appalled at being reduced to working as a private nurse after Linnet's father ruined her family's fortune. ("If there are two things in the world I can't abide it's heat and heathens!") But no review could be complete without a loving mention of Angela Lansbury, whose portrayal of teetering tipsy erotic novelist Salome Otterbourne is one of the campest in cinema history. Lansbury has a ball teetering around sloshing her drinks, and she's adorable to watch.

Farrow and McCorkindale are both terrific - his star never really rose after this, which was a shame. If there's a weakness, it's that the rest of the cast battles to keep up with the leads (Lois Chiles looks the part as Linette, but is quite a weak link, and a couple of the others (Jane Birkin, Olivia Hussey, Jon Finch) are too thinly written to be really effective). But that's a small gripe, and the screen would explode if all the performances were as large as Bette's and Angela's. In short, it's bouncy good fun, a classic of its genre and a true style guide for the limp Hollywood stars and starlets who plod across the screen today. They really don't make 'em like this anymore.
En lire plus
5 personnes ont trouvé cela utile
Utile
Envoi de commentaires en cours...
Merci de votre commentaire.
Malheureusement, nous n'avons pas réussi à enregistrer votre vote. Veuillez réessayer
Signaler un abus
Traduire les commentaires en Français