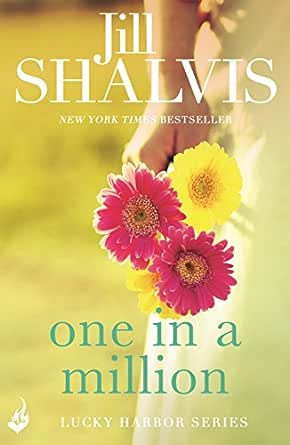 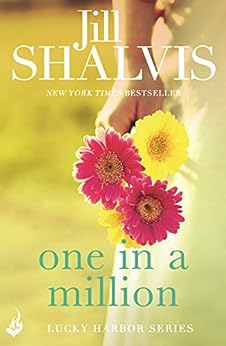 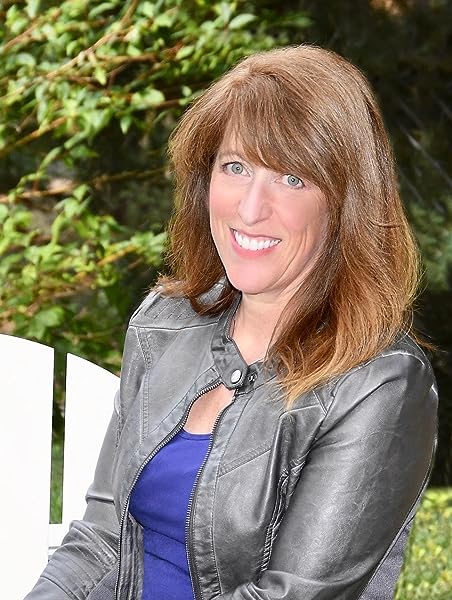 One in a Million: Another sexy and fun romance from Jill Shalvis! (Lucky Harbor Book 12) (English Edition) Format Kindle

Anyone remember those funny, fluttering butterfly feelings you get when you're in love for the first time? [T]hat is what I felt while I was reading Animal Magnetism. If you love a true romance with amazing characters that leave you wanting more, go out and grab a copy of Animal Magnetism.

It is so worth it!

From beginning to end, Animal Magnetism is a captivating story that will have you laughing out loud, rooting for a happy ending for Lilah and Brady, and hoping that this won't be your last visit to Sunshine (Romance Reviews Today)

I loved the sexual tension, the great dialogue, and the well-developed characters. Any book by Jill Shalvis is guaranteed to be a hit! (The Romance Studio) --Ce texte fait référence à l'édition kindle_edition.

New York Times bestselling author Jill Shalvis is the author of many romance novels including her acclaimed Lucky Harbor and Animal Magnetism series. The RITA winner and three-time National Readers Choice winner makes her home near Lake Tahoe. Visit her website at www.jillshalvis.com for a complete book list and daily blog, and www.facebook.com/jillshalvis for other news or follow her on Twitter @jillshalvis. --Ce texte fait référence à l'édition kindle_edition.
click to open popover

Rebecca Black
5,0 sur 5 étoiles LOVE, LOVE , LOVE!
Commenté au Royaume-Uni le 19 octobre 2014
Achat vérifié
5 very bright shiny stars for One in a Million. I'm pretty sure this is the last book in the series which I'm gutted about but I'm sure Jill Shalvis will go onto to write another great series. If you're new to the series I'm jealous cos you've got 12 brilliant books to read. Go right back to the beginning and enjoy them all.

One in a Million is a lovely end to the series. It was nice to see the relationship between Callie and Lucille. Tanner Riggs is yummy and his developing relationship with his teenage son is also a great part of the story. I loved the final chapter which was funny and sweet. That's what Jill Shalvis is so good at writing.
En lire plus
Utile
Envoi de commentaires en cours...
Merci de votre commentaire.
Malheureusement, nous n'avons pas réussi à enregistrer votre vote. Veuillez réessayer
Signaler un abus
Traduire les commentaires en Français

CrazyBookNerd
4,0 sur 5 étoiles Lucky Harbour.. a wonderful small town!
Commenté au Canada le 2 janvier 2015
Achat vérifié
Sounds like this may be the last book of the Lucky Harbor series. If so I will miss this nice little town! Lucille the most I think.. she's a great character throughout all the books. Tanner and Callie... what can I say. I enjoyed their story. I thought Tanner made a great father. Callie, she was a bit to hard on herself, unwilling to risk or even admit to risk.. but able to live in the moment. They made a good couple. I was worried there was going to be no epilogue.. like the last book.. but I was pleasantly surprised with one and enjoyed it! If this is indeed the last book of the series. It ended well!

Sam Fisher
5,0 sur 5 étoiles another hit
Commenté au Canada le 27 octobre 2014
Achat vérifié
Jill Shalvis has done it again. She has a unique way of sucking you into her stories and making you fall in love with all of the characters. I've always been a big city girl, but now I want to move to a small town with busy body old ladies and settle down with my own chivalrous hero. Wonderful, two thumbs up, 10 out of 10.
En lire plus
Utile
Envoi de commentaires en cours...
Merci de votre commentaire.
Malheureusement, nous n'avons pas réussi à enregistrer votre vote. Veuillez réessayer
Signaler un abus
Traduire les commentaires en Français
Charger plus de commentaires internationaux

Claire
3,0 sur 5 étoiles Annoying klutzy heroine
Commenté aux États-Unis le 25 octobre 2014
Achat vérifié
Unfortunately, "One in a Million" is another book about a klutzy heroine who behaves immaturely and this spoiled this Lucky Harbor installment for me. There were flashes when the story worked and one could feel the connection between H/h, but these were spoiled for me by the heroine's annoying behavior and thought process. This has been increasingly Ms. Shalvis' go-to character traits for her heroines, I wish it would stop. Let's go back to heroines who don't act like characters in I love Lucy, please!
Also, this story had way too much involvement by characters of earlier books -- I like getting updates but they shouldn't be there to comment on every move the H/h make, it makes the whole story feel too much like high school. Sort of tacky for adults...
Sorry to be so critical of an author who used to be on my auto-buy list, but in all, this book didn't meet the standard of her previous good books.
En lire plus
10 personnes ont trouvé cela utile
Utile
Envoi de commentaires en cours...
Merci de votre commentaire.
Malheureusement, nous n'avons pas réussi à enregistrer votre vote. Veuillez réessayer
Signaler un abus
Traduire les commentaires en Français

Tiffany (Read All the Romance / Read All the Crime)
2,0 sur 5 étoiles Disappointing end to the Lucky Harbor series.
Commenté aux États-Unis le 30 septembre 2016
Achat vérifié
One In a Million is book #12 and the final book in Jill Shalvis's Lucky Harbor series. I've grown quite fond of the series as a whole, so it's bittersweet to finally finish reading it. One In a Million is okay on its own, but in comparison to most of the other books in the series, I found it disappointing, especially since it's the series wrap-up.

Callie runs TyingTheKnot.com, where she's a virtual wedding planner. Her job is ironic, considering the fact that Callie is cynical about love ever since her heart was broken. Her fiancé, Eric, left her at the altar and she has never quite gotten over it. Instead, she tries to help other brides find their happily ever after, though she has to deal with many bridezillas along the way.

Callie moves back to Lucky Harbor in order to keep a close eye on her grandmother, the infamous town gossip, Lucille. Callie's parents are concerned that Lucille might have a few marbles loose, so they've sent Callie to check on her. I've been a big fan of Lucille throughout the series, even though she meddles in everyone's personal lives. Her character is hilarious and endearing.

When Callie moves back, she's surprised to learn that her high school crush, Tanner, is also back in Lucky Harbor. When Tanner was in high school, his girlfriend became pregnant and it changed everyone's plans for the future. Instead of going away to college on a football scholarship, Tanner married his girlfriend, enlisted in the Navy, and became a SEAL in order to provide for her and their son, Troy. But the marriage was short-lived and they divorced. Troy is now a typically moody 15-year-old who lives with his mother.

After leaving the military, Tanner worked on an oil rig with his buddies, Sam and Cole. Tanner was injured in an explosion that killed their friend, Gil. Tanner still suffers from that injury, which left him with a limp and recurring pain in his leg. But despite his injury, Tanner is now a deep-sea diver working with Sam and Cole.

During the scene where Callie and Tanner reconnect in the town bakery one morning, I found their chemistry rather forced. I also found Callie's personality really grating, a trait that I rarely assign to any of Shalvis's characters. For one thing, their meet-cute isn't very cute at all. During an attempt at conversation, Callie chokes on her doughnut at least three times whenever she tries to speak to Tanner. Really? Get it together, Callie. She comes across as clumsy and bumbling, but not in a charming way at all.

Secondly, throughout this scene—and the rest of the book, actually—I felt that Callie was way more into Tanner than he was into her. When they talk to each other again for the first time in a long while, Callie assumes that Tanner doesn't remember who she is. He does—but I wondered, why would he? In high school, he was a popular jock who had a girlfriend. Callie was a shy nerd who the jocks paid to do their homework for them. I had trouble believing that Tanner would remember Callie after graduation, not to mention after all the experiences he had while in the military. He and Callie never even dated in high school, yet she was so memorable to him? Why? I didn't buy it.

Additionally, I felt that Callie and Tanner were the inevitable conclusion, given that everyone else in Lucky Harbor seems to have paired up. At one point, Callie's friends (Becca and Olivia) say something like, “Oh yes, Tanner would be perfect for you.” Is it because all the other single guys are taken? Serious question. Because I just didn't believe they're such a perfect match for any other reason. It was more like, there's no one else left, so you two might as well get together.

Aside from the believability issues I had with the romance aspect, there's a lot of family drama that I didn't care for. Tanner's son, Troy, re-enters his life in a big way and I just didn't enjoy all of the moody teenage subplot stuff that's a large part of the book.

Overall, this is definitely not one of my favorite books by Shalvis. On its own, maybe it would be an okay read, but considering that the majority of the other books in the series have been 4-star and 5-star reads for me, I found this one lacking. I also had higher expectations since it's the final book.

In retrospect, I think I enjoyed books 1-3 the most, with my favorite couples being Chloe and Sawyer, along with Tara and Ford. Unfortunately, I wouldn't recommend One In a Million unless you've read all the preceding books and feel the need to close out the series.