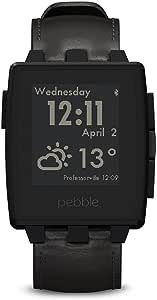 Vangelis Makridakis
5,0 sur 5 étoiles Legendary smartwatch that every watch user should try or have
Commenté au Royaume-Uni le 18 mars 2019
Couleur: Noir matAchat vérifié
It's a great device. Flawless operation and great battery life. Pebble Steel and Pebble Time Steel are the ones with the most battery on my use (15-17 days). Always on display with e-paper and no worries about charging. When you need a charge, takes an hour and lasts 2 weeks. So, it's like not a need at all on your daily "must do" things. I wish Pebble could be resurrected again and to release/continue it's legacy. Thanks to Rebble we (the community) can still use our loved watches. Also we should all subscribe to Rebble.io for help to stay up and running.
En lire plus
3 personnes ont trouvé cela utile
Utile
Envoi de commentaires en cours...
Merci de votre commentaire.
Malheureusement, nous n'avons pas réussi à enregistrer votre vote. Veuillez réessayer
Signaler un abus
Traduire les commentaires en Français

ME247
5,0 sur 5 étoiles A collectable classic?
Commenté au Royaume-Uni le 28 décembre 2016
Couleur: Acier BrosséAchat vérifié
I purchased a Pebble Steel (401S) after several months wearing a (previously owned) Pebble 301BL, so I knew what to expect. I wasn't disappointed! I purchased the watch knowing that Pebble had 'gone under' (assets acquired by FitBit), as I couldn't find a better alternative for the price. If the watch goes wrong withing warranty Amazon will replace or refund your money. Most gadgets go out of date within a couple of years, so I'm personally not worried about long-term support.

In terms of design, the Pebble Steel looks somewhat retro, in a quirky 'Steam Punk' kind of way. The steel case and buttons are well machined, and the black leather strap completes the look. My only gripe is the leather strap and its fitting. I know the strap won't last for ever, so I'll need to purchase a replacement at some point. Fixed in later models, the non-standard fitting of the Pebble Steel means limited choice which is a shame.

The 301 and 401 Pebble smartwatches have just enough features for the 'average Joe', and I suspect we may see these show up in future products from Fitbit. The watch receives (vibrating) notifications via an app on your iOS or Android smartphone, and there are of plenty of third-party lifestyle apps to choose from too, such as sleep trackers, step counters, navigation, etc. The watch has independent timer, alarm, and stopwatch functionality, and can also control music playback of apps such as Spotify.

As you can see from the photos attached, you can get a variety of different watch faces for your Pebble. You can even design your own using a simple web interface! Some watch faces are configurable via the Pebble smartwatch app on your smartphone. Battery life is pretty good, 4 - 5 days in my experience, but this will depend on the number of notifications you receive and the apps you run on the device.

I've tried other smartwatches, such as the Martian, but the Pebble has the best mix of features/functions for the price at the moment. No doubt that will change in time. I'm not a design or fashion guru, but I think the early Pebble watches could become collectable in the future (give it 20 years or so). Although the Pebble Steel is waterproof, I'll probably wear the 301BL when doing sporting activities or swimming as it has a silicone strap. The Pebble Steel goes well with a smart suit and doesn't look at all geeky or bulky. The Pebble smartwatch is easy to setup and use, so ideal for the non-technical user.

*** 3 month update ***
The top two buttons on the right-hand-side of the watch are no longer working correctly. They only function after pressing the bottom right-hand-side button. It's as though this "wakes" the watch.
En lire plus

It's main forte seems to be alerting you to alerts on your phone. Even that it does better than expected. For example I get alerts on my watch that I don't even see on my phone. Also if I dismiss the alert on the watch quickly, it doesn't even pop up on the phone.

Konstantinos
5,0 sur 5 étoiles Gets the job done
Commenté au Royaume-Uni le 15 mai 2016
Couleur: Noir matAchat vérifié
I am a happy owner of the pebble steel watch and it just do the job without being fancy or way out of budget.Stready connection via bluetooth (wide range as well) ,the baterry lasts 6 days approximately ,lots of watchfaces to chooce from and lets not forget its primal existence,It is a watch that tells time and date!I already asked pebble via twitter about a language pack for greek but hopefully they will eventually include it eventually in a update.