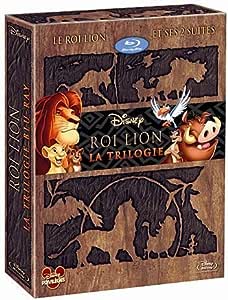 Never seen The Lion King before buying the DVD, only really wanted to watch it as friends kept nagging me to.

But really glad i took the chance on it, while yes, it does start pretty sad and at one point i even shed a tear, the second half is so funny, so heart-warming, so uplifting, that it more than makes up for the start of the film.

Didn't enjoy the 2nd Lion King as much as the first, and truth be told I got bored in places. Please don't get me wrong, i'm not saying it's bad, or a awful film, it's just not as good as the first, for me.

The film centers on Simba and Nala's daughter Kiara, who falls in love with Kovu, a male rogue lion from a banished pride that was once loyal to Simba's evil uncle, Scar. Separated by Simba's prejudice against the banished pride and a vindictive plot planned by Kovu's mother, Kiara and Kovu struggle to unite their estranged prides and be together.

Most of the original cast returned to their roles from the first film, apart from Rowan Atkinson, who was replaced by Edward Hibbert as the voice of Zazu for this film and its prequel.

Out of the 3 Lion King films this one is by far my favourite, just because I totally love Timon and Pumbaa, but then again, who doesn't.

Hakuna Matata is the 3rd & final installment in the Lion King trilogy. The film is a prequel/parallel to The Lion King, and focuses on Timon and Pumbaa before, during and after the events of the original film.

Peter
2,0 sur 5 étoiles Great box, but...
Commenté au Royaume-Uni le 17 mai 2016
Achat vérifié
... I bought this box, because in the product information there is written, there would be German audio on the blu rays. I was really disappointed, when I unpacked the blu rays, and saw there was no German audio on them. Sending the blu rays back to uk would be too expensive.
But it is still a great box of three great movies, it just does not match the product information.
En lire plus

SineadH
5,0 sur 5 étoiles Simply wonderful!
Commenté au Royaume-Uni le 16 décembre 2015
Achat vérifié
As a small child, my eldest daughter watched The Lion King over and over again and cried every single time at exactly the same point in the movie. As our family grew, the original DVD became scratched and was no longer useable. I decided to purchase this set for the same daughter to watch with her toddler sister and both of them have spent hours bonding over it. It is a truly wonderful collection and it brings back so many memories for my husband and me when we hear our eldest and youngest singing the songs together and chatting about their favourite and least favourite parts of each movie...
En lire plus
4 personnes ont trouvé cela utile
Utile
Envoi de commentaires en cours...
Merci de votre commentaire.
Malheureusement, nous n'avons pas réussi à enregistrer votre vote. Veuillez réessayer
Signaler un abus
Traduire les commentaires en Français

Sarah Barnett
5,0 sur 5 étoiles Great to see the original animation in Blu-ray
Commenté au Royaume-Uni le 10 août 2019
Achat vérifié
Went recently to see the 2019 "live-action" remake of the Lion King in the cinema and although the new edition was perfectly fine, it just made me nostalgic to see the original animation of my childhood and the newer version is no comparison despite all the big-name celebrities who've lent their voices to beloved characters. The two "straight-to-DVD" sequels are also a very enjoyable addition - but nothing holds a candle to the original. One of the best movies of the '90s if not of all time!
En lire plus
Utile
Envoi de commentaires en cours...
Merci de votre commentaire.
Malheureusement, nous n'avons pas réussi à enregistrer votre vote. Veuillez réessayer
Signaler un abus
Traduire les commentaires en Français
Charger plus de commentaires internationaux

R. ODELL
5,0 sur 5 étoiles Superb! Worth it's weight in ermm mashmellows
Commenté au Royaume-Uni le 25 juin 2012
Achat vérifié
This is an excellent box set and although it's a dvd box set rather than the bluray, it's worth the money... most bluray players will upscale quite well (obviously not as clear as a bluray, but darn close!).

Watching Lion King (movie 1) is fantastic and for a small price you get all three editions... perfect for you, your mum and the kids! (what more can I say?!)

Box itself is rather special, although cardboard it has a lovely well built construction and design. (slides half way down the box).

3 x disks (dvd) for the price of 1 (bluray), and don't forget this cartoon movie was created before blurays came about.