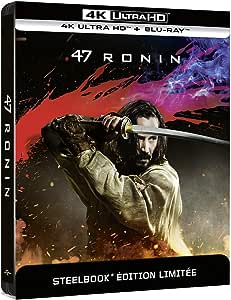 EllaGuru
4,0 sur 5 étoiles Entertaining, good value 'instant 3D collection'
Commenté au Royaume-Uni le 7 janvier 2015
Achat vérifié
None of these movies has (or deserves) a reputation as a modern classic, but at the right price this set makes a very worthwhile addition to a 3D Blu Ray collection. (I paid £11 or so; at the time of writing it's in a '3 Box Sets for £24' deal!)

I bought this set (along with  Hugo  and  Dredd , two other great value 3D titles) immediately upon upgrading from a DVD-based, 2D-only setup to a Blu Ray-based, 3D-capable setup, as a sort of instant 3D movie collection on a budget. As such it was a very good buy.

RIPD is a decent if rather by-the-numbers supernatural comedy that looks good in HD and 3D. Three stars.

Immortals is a very stylised affair with a distinctive, muted gold-and-brown colour palette and some oddly austere (digital) sets. As a story it's no more than OK, so how much you enjoy this will depend on how much the aesthetics appeal to you. I wasn't that keen, although the picture quality and use of 3D are both fine. Two stars.

The stand-out film for me was 47 Ronin, which really makes the most of its Japanese setting in visual terms. There's a real sense of scale and the beautiful and richly-coloured costumes, architecture/sets and landscapes look great. The story, like the setting, benefits from being relatively unfamiliar to a Western audience. Four stars.

Matt
3,0 sur 5 étoiles Crossed Identity
Commenté au Royaume-Uni le 28 juillet 2014
Achat vérifié
This film has problems, such as the pacing and the sombre tone of everything, but it is capable of some astoundingly beautiful scenes as well. I would compare it to a high budget 70's martial arts film that takes itself painfully seriously and tries very hard to get across it's message about honour and sacrifice.
As i was not aware of the legend of the 47 Ronin from Japanese history it was only after some research that i discovered some of what i think this film hoped to put across, and that can only be a negative for what appears to want to be a big mainstream action film.
The performances are very good from the actors involved, especially if you are a fan of Keanu Reeves and his 'understated' form of acting. The action sequences are handled well and choreographed beautifully. What lets this film down is the long sequences between these gems were people wander around the forest looking longing/confused/earnest.
I do like this film, but not as much as i hoped
En lire plus
4 personnes ont trouvé cela utile
Utile
Envoi de commentaires en cours...
Merci de votre commentaire.
Malheureusement, nous n'avons pas réussi à enregistrer votre vote. Veuillez réessayer
Signaler un abus
Traduire les commentaires en Français