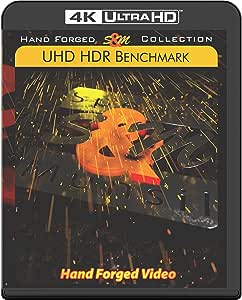 matthewholland
4,0 sur 5 étoiles There is a reason for it being so fiddly.
Commenté au Royaume-Uni le 31 juillet 2019
Achat vérifié
Very detailed display calibration.
The menus are not exactly the most user-friendly. But that is sort of incidental.
The test patterns are the important thing here. And they work extremely well indeed. The results they produce are just astonishing.
I was worried when other reviewers said there were no instructions, but the previous version (on Blu-ray) does give test pattern instructions.
I was more concerned that the blue filter lenses, to optimise the colour/tint values were not included.
They were included in the Blu-ray version, but not this 4K one. So you need both.
The Blu-ray (1080p HD) optimiser for the blue filter and the instructions, and this disc to optimise your 4K tv.
I think my display is now as good as it shall ever get. This is on a 50inch LCD 4K (2160p) with High Dynamic Range.
Even then, it requires both patience and practice, but with a little effort it yields amazing results in picture performance.

The most useful tool for me has allowed me to perfectly adjust the audio/visual sync settings, so that I finally get perfect lip sync. I found that altering the sync setting on the Blu-ray player gave a more accurate result than using the Soundbar settings. Having sound and picture out-of-sync can be very distracting.

There are a series of short clips to use as a test reel. A video slideshow of snowy Yellowstone, which provide good examples for a bright, clear, sharp, precise and very detailed image.

I used a few film scenes for testing. The opening of Bladerunner, and bits of Star Trek. I had forgotten how irritating the lens flare is, but the overall picture was better than had ever seen it before.

I have deducted one star, because the menus are not helpful and the overall instructions are just missing.
Make sure you buy the Blu-ray one as well as this 4K disc, and the result will be great. So....it’s expensive, but it’s worth it for a home Cinema purist. And honestly, only a purist would consider getting something like this.

Honestly, I believe my home Cinema setup is now as good as it will ever get, without spending a GREAT DEAL of money upgrading my hardware, all over again.

Liberator72
5,0 sur 5 étoiles ESSENTIAL
Commenté au Royaume-Uni le 6 juillet 2019
Achat vérifié
Following on from previous versions, this UHD HDR benchmark disk is once again an absolutely vital part of any A/V enthusiasts collection. I have previously always used a professional calibrator to set my TV’s in the past but have used the previous HD 2nd edition version of this disk to verify calibration and tweak certain things to my liking. Having recently purchased calibration equipment and software myself, I have been waiting for this disk to arrive to verify my own attempts at manually calibrating SDR, HDR and Dolby Vision on a 2017 series LG OLED. By using this disk I managed to see that for the most part I was successful in my first attempt at display calibration and managed to tweak a couple things where I went wrong, giving me the confidence to fully calibrate my own equipment in the future. The demonstration montages on the disk are stunning and really push your display to its limits giving you the opportunity to truly see what UHD HDR is all about. Another ‘MUST BUY’ from Spears & Munsil
En lire plus
7 personnes ont trouvé cela utile
Utile
Envoi de commentaires en cours...
Merci de votre commentaire.
Malheureusement, nous n'avons pas réussi à enregistrer votre vote. Veuillez réessayer
Signaler un abus
Traduire les commentaires en Français

S. K. Foster
3,0 sur 5 étoiles "not for the amateur"
Commenté au Royaume-Uni le 9 janvier 2020
Achat vérifié
This is a mixed bag - there are good points and bad points.

This is an ideal purchase if you are a professional calibrator and have the equipment you need to calibrate TV's. However, if you want something so that you can just get a good picture on your TV, this may be a waste of money. There are a lot of pattern generators on this disc which only a professional would need, and know, how to use. It doesn't come with ANY instructions on how is the best to use the disc. If you want to know these you have to go to the Spears & Munsil website and look at the guide on how to use it to achieve the best picture on your TV. Neither does it include a blue filter (though if you are a Samsung or LG owner, this filter may be built into your TV settings options) which you need to get get the correct colour & tint settings. This disc can only be used on a 4K blu-ray player, not just a normal blu-ray player. If you are a keen AV enthusiast, you will probably be more akin on how to use some of the generators on the disc, but really if you just want to set your TV up to get a good picture there are cheaper (and some free) options for you.

On some blu-rays, you may find the THX Optimiser. This is easy to use and comes with instructions on how to use, you still have to send for the blue filter, but it doesn't cost very much. I have used this in the past and always had very good results. There is something called "AVSHD 709" which you can download and burn it to a DVD or Blu-ray. There is also an online tutorial (You Tube) on how to use it. Just search for AVS HD 709
En lire plus
3 personnes ont trouvé cela utile
Utile
Envoi de commentaires en cours...
Merci de votre commentaire.
Malheureusement, nous n'avons pas réussi à enregistrer votre vote. Veuillez réessayer
Signaler un abus
Traduire les commentaires en Français

Jonathan Weiss
4,0 sur 5 étoiles No better calibration then the 1080 bluray version.
Commenté au Royaume-Uni le 6 novembre 2019
Achat vérifié
Having got the DVD and bluray version I thought as I have 4k TV and player I'd get this disc.
To be totally honest theirs not much difference in the calibration I got from the bluray and a HDR calibration video on youtube.
Theres only demo video unlike the bluray which has a few including a great DTS trailer.
The NIT setup needed could've done with some info on which one to select.
Each one gave my contrast a different setting so no idea if it's set correctly.
Has no audio tests like the DVD and bluray.
One good thing this disc alerted me too, my 4k players connected to TV thru the AVR and disc informed me AVR can't handle HDR10+ so connected player to TV as it's HDR10+.
En lire plus
Une personne a trouvé cela utile
Utile
Envoi de commentaires en cours...
Merci de votre commentaire.
Malheureusement, nous n'avons pas réussi à enregistrer votre vote. Veuillez réessayer
Signaler un abus
Traduire les commentaires en Français

Miggyboys
3,0 sur 5 étoiles The best calibration disc but no instructions online and a very cheap case.
Commenté au Royaume-Uni le 5 avril 2020
Achat vérifié
This calibration disc is very comprehensive and will certainly allow one to get their contrast, brightness and colours spot on. But there are no instructions when playing the disc, which would have been the most obvious place to put them i.e. just before each test or as a pop up in the actual test. They're now available online on their website. One star knocked off for this.

Another star knocked off for what is the cheapest and poorest blu ray case I've ever seen. The outside jacket is a paper slip contained under a plastic that is only sealed at the ends and it comes off very easily if caught on the edge. I actually accidently tore into plastic sleeve when taking off the outside wrapper. The case itself flexes all over the place. For something that costs £40, the case is absolutely abysmal.

Regarding colour filters, they're not included for a reason; they explain that they weren't very accurate in the first place and throw up differing results, depending on the filter itself. Secondly, a number of TVs now have colour filter options built in the menus. Look for RGB filter in your menu or something similiar; select R or G or B and the whole screen turns to showing just that colour. LG C8 OLEDs have it built in, as do some Samsung TVs. I do understand the issue, what is one to do if their TV doesn't have a built in colour filter? The next option, though perhaps not ideal, is to use a physical colour filter.

SJM
4,0 sur 5 étoiles Great disc but....
Commenté au Royaume-Uni le 29 décembre 2019
Achat vérifié
There are a couple of things to know before purchasing this disc, first, there are no instructions in the disc as you are expected to go on the internet and read and understand some quite technical information (well at least to a novice like me!). Secondly, a blue filter is not supplied although it does state that this isn't required for this disc but then why have test patterns for colour setting which needs this?

GadgetMaster
1,0 sur 5 étoiles Can’t read disk in any of my 4K UHD DVD players.
Commenté au Royaume-Uni le 17 février 2020
Achat vérifié
Well despite having two expensive high end and recently purchased Panasonic 4K UHD DVD players (Feb 2020) this disk would not play in either of them, they simply couldn’t read it. Amazon have been very gracious and are collecting it from my house tomorrow and giving me a full refund. I thought I may have received a faulty disc but then I saw that other customers who had Panasonic DVD players have had similar issues so I have tentatively ordered a different brand calibration DVD from Amazon for £6.99, although I suspect it may not be as thorough as the S&M calibration DVD.

Marc Foreman
5,0 sur 5 étoiles Worked wonders in helping me optimise my UHD HDR TV
Commenté au Royaume-Uni le 15 janvier 2020
Achat vérifié
This disk contains everything necessary to test and optimise the settings of your TV.
Do NOT use it without first visiting the Spears and Munsil website however, as it's only there that the appropriate instructions are given to get the best out of it.
A basic adjustment (which will be fine for most viewers) takes around 20 minutes to do once you get into the swing of it.
En lire plus
Une personne a trouvé cela utile
Utile
Envoi de commentaires en cours...
Merci de votre commentaire.
Malheureusement, nous n'avons pas réussi à enregistrer votre vote. Veuillez réessayer
Signaler un abus
Traduire les commentaires en Français

Axaban
1,0 sur 5 étoiles Over priced and didn’t work for me
Commenté au Royaume-Uni le 29 janvier 2020
Achat vérifié
Would not play in my Panasonic uhd player. I was thinking whether I wasted my money or not but thought I’d give it a go. Then it would come up ad disc error on my player so that made my mind up and I returned it.
En lire plus
Utile
Envoi de commentaires en cours...
Merci de votre commentaire.
Malheureusement, nous n'avons pas réussi à enregistrer votre vote. Veuillez réessayer
Signaler un abus
Traduire les commentaires en Français

Doug©
4,0 sur 5 étoiles Incredibly useful but expensive and requires more to get the best out if it
Commenté au Royaume-Uni le 12 février 2020
Achat vérifié
It's a great tool but with two caveats; 1) It's incredibly expensive & 2) You need to purchase the instructions through kindle for £1.99 to get the most out of it. It's a pity they haven't made an UHD Digital Video Essentials as the standard HD version is amazing.
En lire plus
Utile
Envoi de commentaires en cours...
Merci de votre commentaire.
Malheureusement, nous n'avons pas réussi à enregistrer votre vote. Veuillez réessayer
Signaler un abus
Traduire les commentaires en Français