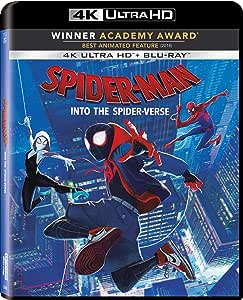 Spider-Man: Into the Spider-Verse [Blu-ray]

This draws on a comic called Ultimate Spider-Man, which for the uninitiated was part of a range that were totally free of regular Marvel comics continuity, and thus could do whatever they wanted with key characters. After a while in the run, Peter Parker died, and was replaced as Spider-Man by a teenager called Miles Morales.

This is a fresh take on the whole thing. And tells Miles origin story. And then some.

Miles is a gifted student, struggling with a move to a new school. When he happens to get the same powers as Spider-Man, and then sees him die, it looks as if a superheroic destiny awaits. But of course it's as never easy as that. He has a lot to learn. Lots to measure up to. And there are others with the same powers suddenly in the world with him. Not all of them are human. If he can't measure up quick, then it's not just his universe that will be destroyed....

You will never have seen anything like this before. Because the animation really does make it look like a comic onscreen. it's incredible to look and amazingly well done. But it's not just flashy visuals. Because it's got a great script to go with it. It's the story of a young man learning how to be a hero, and it does that well. But it's also a buddy comedy. It's about friendship and responsibility. And love and loss. And so many other things.

The multiverse concept does allow for some fresh takes on existing ideas. The writing is ever so clever. And the character interaction amazing. There are some great vocal performance from those playing the other Spider folk. And it's probably one of the best bits of acting Nicolas Cage has done in a while.

Parents do be aware there's a lot of people dealing with grief in here, so there are as many sad as fun moments. Thus it might be a little much for the under sevens. And epileptics and those bothered by flashing lights will need to be careful with a few moments. But otherwise, it's great and original film making, and well worth five stars.

Do keep watching to the end of the closing credits. But don't read them, otherwise you will get a spoiler for what's there...

The dvd begins with an ad then a trailer. Both can be skipped via the next button on the dvd remote. The trailer is in the previews section of the extras anyway.

Language and subtitles on it are:

Film maker's commentary.
An animated short featuring Spider-Ham, called 'Caught in a Ham'. A very funny five min long Looney Tunes style cartoon.
Ultimate comics cast: a fourteen min feature about casting the actors. A really good watch.
Tribute to Stan Lee and Steve Ditko. A touching nine min long tribute to Spider-Man's creators.
Spider-Man ultimate fan easter egg challenge. A five min long look at some of the cameos and other references in the film. Very interesting and will make you look at some scenes again.
Lyrics vids: pop videos for two songs that come from the film soundtrack. Sunflower and Familia. Both run roughly three mins and can be watched individually or in a row. The former is a better video, as it uses film clips. The latter doesn't.

K. G. A. Alavi
5,0 sur 5 étoiles We are all Spider-man
Commenté au Royaume-Uni le 20 avril 2020
Achat vérifié
I really enjoyed this movie. Watched it tte first time with my kids, and again at home on DVD. I actually enjoyed it more the second time.

I will always be a fan of Peter Parker in the original comics. Sadly I do not recognise that character since Brand New Day in either the comics or the movies. This came the closest I really enjoy all the other Spider characters as well.

This is a true passing the torch movie. With the main character allowed to take on and step out of the shadow becoming his own Spider-man.

The interviews and Easter eggs at the end are great. If there is one thing I would change about this movie it is Spider-man get beaten up a lot. I know the theme is no matter how many times he gets knocked down he gets gets up, but Spider-man does (did) win a lot of the fight he was in. As for the Kingpin please see Back in Black part 4 to see how a fight between Spider-man and the Kingpin would play out.

A great entertaining movie with great characters and character development. I would love to see a movie with any of the characters. Definitely one of the best Soider-man movies so far.
En lire plus
Une personne a trouvé cela utile
Signaler un abus
Traduire les commentaires en Français

rbmusicman/and/movie-fan'
5,0 sur 5 étoiles A SUPERB ANIMATED ADVENTURE THAT WILL LIGHT-UP YOUR SCREENS
Commenté au Royaume-Uni le 24 avril 2019
Achat vérifié
There have been many animated super-hero movies in recent times, which I have not seen or bothered with, because quite simply I like the live-action movies and haven't given animation-versions much thought, until now, heard so many good things about this one, had to give it a go.
The story centres upon young Miles Morales (voiced by Shameik Moored ) who struggles at school to meet his fathers high-expectations.
Miles, loves his music, loves to draw, and enjoys reading Spiderman comics.
His uncle takes him to an abandoned subway station to paint graffiti on its walls, Miles is bitten by a radioactive spider as his hero Spiderman had years before, Miles soon finds he has strange abilities but needs guidance on how they can be used.
He returns to the subway to find the spider that he'd killed after the bite to find the master criminal Wilson Fisk had built a collider there in the hope of finding a parallel dimension where he may again find his lost wife and son...........Miles realises that his hero is also at the subway attempting to prevent Fisk using the collider.
Spiderman realises that the youngster possesses some of the powers he has.
Spiderman after fighting off Fisks enforcers comes to grief at the hands of the master criminal.
The story, however, has only just begun..........
Miles will meet an older version of his hero Peter B Parker (voiced by Jake Johnson) who hails from another dimension but is more interested in eating burgers these days than being a super-hero.
Miles persuades Peter B to show him the ropes, reluctantly the older Spiderman agrees in exchange for help to steal data from Frisk's research centre, however, they run into trouble but are rescued by Spiderwoman (voiced by Hailee Steinfeld) also from another dimension who has a strange resemblance Miles's new school friend Gwen.......
The three joined by Spider-Ham as they do battle with Fisk and his allies...
After which -
Young Miles will help his new friends return to their own dimension...and himself become the worlds new Spiderman.
Have to say, this is a superb animation adventure that will I'm sure to hold your interest from start to finish.
The adventure enhanced greatly by having no limitations that the live-adventures obviously do, though of course even they rely heavily on the use of CGI to create the visual experience we enjoy so much.
A truly splendid animated tale that deserves all the praise that has been heaped upon it.
En lire plus
2 personnes ont trouvé cela utile
Signaler un abus
Traduire les commentaires en Français

It's funny, engaging, emotional, and visually stunning... but all of that pales into insignificance compared with the acting. You can close your eyes and just listen, the vocal acting alone is that good: the vocal soundtrack should be a new template for how to make an audio play.

Knowing stuff about Spider Man is not needed.

If you Loathed The 300, the Sin City films and found that TinTin flick from a while back somewhat confusing (almost photoreal cartoonery, am I right?), then relax. The mishmash of styles work extremely well.

Buy it on blu ray - the extras are fun and informative.

If you hate it, give it away to a charity shop...
But you probably won't do that
En lire plus
Signaler un abus
Traduire les commentaires en Français

Chika
5,0 sur 5 étoiles Playing with Parallel Dimensions Poots!
Commenté au Royaume-Uni le 22 mai 2019
Achat vérifié
Yes, I liked this. OK, yes, it plays with social politics; yes, it uses at least one big name to push itself (two if you include Stan the Man) but it worked well. Actually the thing that got me interested at first was the mention that it featured Spider-Ham, a character I remember from years ago when I occasionally read "What The..." but the show had a good story and didn't overplay any of the oft used ploys used by so many wHollyWeird three act plays. Yes, there was the hint of a love interest but it went nowhere, was hardly brought up and didn't get in the way. Yes, we had a story that had a hero come from seemingly nowhere but we didn't dwell too much on that (though the fart outtake thing they had on the DVD gave a whole new dimension to a few of the scenes). In fact they seemed fairly true to the classic idea of SpiderMan with only a few exceptions and those could be overlooked if you didn't like them. A good test for any film is whether, having seen it completely, you could actually consider seeing it again.