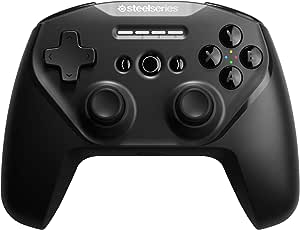 Paul Green
5,0 sur 5 étoiles Who needs another pad!
Commenté au Royaume-Uni le 10 juin 2020
Taille: Stratus DuoStyle: Win, Android, VRAchat vérifié
I love this pad! I have used a lot of game pads in my time as I have owned consoles going all the way back to the Atari up to current systems. I spend most of my time on PC these days but like a pad for some select titles. The beauty of this pad is that it has the lay out of your usual current controllers like the xbox but has some hidden tricks. Its wireless but charges by micro usb rather than taking batteries, a good start but nothing super special there. It has a light strip so that you can see if you are player 1,2,3 or 4, pretty nice not many pads doing that. My favourite though is that fact that it can be set to Wi-Fi or bluetooth! Using Wi-Fi I can connect to the PC with the supplied dongle and play as normal, but and this is why I really love it. If I decide to leave the PC and go else where in the house, I can switch to bluetooth connect to my phone and game stream to my phone! It's like turning your PC into a nintendo switch! granted it's not exactly the same but the fact I can play darksouls any where in the house and not be bound to my PC desk is pretty liberating. (Small note, I attach my phone to the controller using a bracket that is also supplied by steel series)
En lire plus
Une personne a trouvé cela utile
Signaler un abus
Traduire les commentaires en Français

Turtle
2,0 sur 5 étoiles Quality problem let an anotherwise nice controller down.
Commenté au Royaume-Uni le 7 juillet 2020
Taille: Stratus DuoStyle: Win, Android, VRAchat vérifié
I never knew it would be so hard to find a suitable controller for mobile gaming ... and I've now messed around buying and returning a few controllers, so I thought I'd write a review to hopefully save others the trouble i've been through.

Controller #1 - Steel Series Stratos Duo. Price paid: £64.99 not including phone mount.
It looked the business, and with gaming sites recommending it, I bought it straight away and was initially not dissapointed. Battery is built in, the look and feel is excellent and it holds comfortably like an X-Box controller. When not in use it goes to sleep by itself to preserve battery. The only slight disapointment was the Steel Series phone mount prevents you from plugging a USB lead in whilst it's attached - meaning you have to faff around removing it when it's time to re-charge. But, the recharge wasn't needed often - battery life was good, and the LED's tell you how much remains. Other reviews have complained that the 4 LED's flash every few seconds when connected to Bluetooth - it didn't bother me.

However, I really struggled with controlling my car in F1 Mobile Racing. The steering seemed delayed and digital, applying counter steer was impossible. I started to look for other controllers which might perform better, and I also consider that the game itself is at fault here - the game doesn't officially support controllers on Android, and this shows. Also, be aware that this controller is not supported at all by Call of Duty.

Quality appears to be Steel Series achilles heal, and after just two or three weeks of gaming, the "B" button stopped working properly, causing the controller to lock-up when this is pressed. If it wasn't for this fault, I'd probably have kept this controller and been reasonably happy, even without being able to play Call of Duty.

Con's:
It broke
Phone mount is fiddly
Not all games support it

Controller #2 - Jevogh Xbox one Controller JV24. Price paid: £45.00.
Note: I didn't try this controller with Call of Duty.
Whilst trying to work out why my Formula One car was so uncontrollable, I bought this significantly cheaper controller to do a comparison. It worked just as badly for controlling the car, and wasn't a very nice controller and I quickly returned it.

Controller #3 - Sony Playstation Dualshock 4. Price paid: £44.99
By this time I had tried Call of Duty and seen the error of my ways... I don't have a Playstation these days and didn't realise the controllers are Bluetooth compatible, and work with Android. Suddenly my F1 car is more controllable, and my laptimes have improved - it's hard to pinpoint the exact difference (analogue stick deadzone, perhaps?), and F1 Mobile Racing is still not perfect, but it's a lot better.

I've had a few connection issues, and I'm also unsure of the state of charge of the controller battery... Without having a Playstation to tell me this, I have no indication and I suppose it could run out of battery mid-game. Worse, it doesn't seem to go to sleep, so you have to turn off your phones bluetooth unless you want the battery to drain. You also have to avoid certain USB fast chargers if you wan't to avoid killing the battery. Furthermore, I've had some Bluetooth connectivity issues - I had to re-start my phone, and re-pair the connection to get it working again. Although I think this is potentially teething issues whilst I get used to how it pairs.

Finally, the first phone mount I bought snapped literally within hours... It seems Sony have designed a controller that is inherantly difficult to mount a phone onto (because of the touch-pad front button), and the plastic mounts have to curve around this button, with a thin plastic section. So, be prepared for breakages of this part.

In conclusion, I thought this would be really simple; buy a controller, have more fun on games. But it's turned into a saga of buying and returning hardware to find something suitable for purpose, and even now the Sony PS4 controller is not perfect for the job.
En lire plus
Une personne a trouvé cela utile
Signaler un abus
Traduire les commentaires en Français

Ruth
3,0 sur 5 étoiles Anologues to rigid, no software for mobile.
Commenté au Royaume-Uni le 1 septembre 2019
Taille: Stratus DuoStyle: Win, Android, VRAchat vérifié
Ok I've gamed for many many years now and feel I could give a good review on this! In my opinion it is a good solid feeling controller however there is 2 major things wrong with this pad and 2 minor.

Minor :
1) Anologue sticks should be positioned like xbox controllers to reduce thumb fatigue on your left.

2) Anologue sticks are way to rigid and you almost have to fight them to maintain a decent aim.

Major :
1) I brought this controller to play mobile games yet there is no software for mapping buttons like octopus (instantly felt like I had installed malware), I would feel alot safer if they provided this software.

2) 64.99 for a controller that has no flappy paddles on the back, this should be standard now.
En lire plus
2 personnes ont trouvé cela utile
Signaler un abus
Traduire les commentaires en Français

Eoin
4,0 sur 5 étoiles Very comfortable and very responsive, but some issues with design
Commenté au Royaume-Uni le 25 août 2020
Taille: Stratus DuoStyle: Win, Android, VRAchat vérifié
This controller is the best I've used for PC so far. Its shape fits into the player's hands very comfortably and ergonomically, the analog-sticks and main four button are all in reach, responsive, and pressing buttons is neither too spongy nor too resistant. The power system lasts ages before needing to charge, and charging is easy. It also feels quite robust and durable - I have yet to drop this controller, but I get the impression that if I did, the shell would withstand the drop very easily.

There are three negative issues, though, which is why I am only giving one star. The first issue is the the shoulder and trigger buttons. There is no need whatsoever for shoulder buttons or triggers to be so incredibly chunky. It is possible to tap a shoulder button accidentally when trying to press the trigger. Repeatedly pressing the trigger or the right-shoulder is quite cumbersome as a result, so certain weapons in games like shooters won't be as easy to use.
The second problem is the Start, Select and Home buttons. While all other buttons protrude from the controller, these three buttons recede into it. This means you have to reach further with your thumb, taking half your hand off the controller in the process, in order to press them. In so doing, it is possible to accidentally press the left trigger (as it is so chunky, see previous).
Thirdly: There is a piece of plastic on the part of the controller where the jack for a headset would be on an Xbox 360 controller. This piece of plastic looked like it was supposed to be pulled off. There were no instructions or warnings in the information booklet pertaining to this thing. Turns out it wasn't meant to be pulled off. Now, there is a small hole in the controller, and part of the plastic thing is inside the controller, rolling around, occasionally interfering with the analog sticks. The hole is too small for the thing to roll back out of, and I have attempted to open up the controller by taking out the screws on the underside. The controller does not come apart in this way, like others do, so this was unsuccessful. So if you buy this controller, don't pull that thing off.

The only reason I give so much detail on the negatives is so that the designers and manufacturers know what to improve in later models. In spite of all these issues, this controller is very good. You are definitely getting your 60 pounds worth.
En lire plus
Signaler un abus
Traduire les commentaires en Français